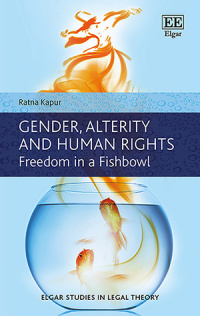 Freedom in a Fishbowl

9781839104473 Edward Elgar Publishing
Elgar Studies in Legal Theory
Ratna Kapur, Queen Mary University of London, UK
Publication Date: 2020 ISBN: 978 1 83910 447 3 Extent: 328 pp
Human rights are axiomatic with liberal freedom. Yet more rights for women, sexual and religious minorities, has had disempowering and exclusionary effects. Revisiting campaigns for same-sex marriage, violence against women, and Islamic veil bans, Gender, Alterity and Human Rights lays bare how human rights emerge as a project of containment and unfreedom rather than meaningful freedom. Kapur provocatively argues that the futurity of human rights rests in turning away from liberal freedom ­and towards non-liberal registers of freedom.

More Information
Critical Acclaim
Contents
More Information
Human rights are axiomatic with liberal freedom. This book builds on the critique of this mainstream and official position on human rights, drawing attention to how human rights have been deployed to advance political and cultural intents rather than bring about freedom for disenfranchised groups. Its approach is unique insofar as it focuses on queer, feminist and postcolonial human rights advocacy, exposing how such interventions have at times advanced neo-liberal agendas and new forms of imperialism, and enabled a carceral politics rather than producing freedom for their constituencies.

Through a focus on campaigns for same-sex marriage, ending violence against women, and the Islamic veil bans in liberal democracies, human rights emerge as forms of governance that operate through normative prescriptions, which bind even as they purport to free, and establish a hierarchy of the human subject: who is human and who is not; who qualifies for rights and who does not. This book argues that the futurity of human rights rests in a transformative engagement with non-liberal registers of freedom beyond the narrow confines of the liberal fishbowl.

This book will have a global appeal for students and academics concerned with international and human rights law, jurisprudence, critical legal theory, gender studies, postcolonial studies, feminist legal theory, queer theory, religious studies, and philosophy. It will appeal to political activists and policymakers in the global justice arena concerned with the freedom of disenfranchised groups, human rights, gender justice, and the rights sexual and religious minorities.
Critical Acclaim
‘In her book Gender, Alterity and Human Rights: Freedom in a Fishbowl, Ratna Kapur offers a powerful critique of human rights and liberal freedom that challenges our certainties of human rights advocacy and critical legal projects. Her book is a must-read for every human rights scholar and legal theorist.’
– Cara Röhner, International Journal of Constitutional Law

‘Ratna Kapur’s book, Gender, Alterity and Human Rights: Freedom in a Fishbowl, is a much needed, well timed, radical critique of the current human rights praxis. While Kapur does acknowledge the value of liberal rights, she argues that they “cannot give us what we do want – that is, freedom”. It makes an impassioned case for looking both beyond and away from human rights as a means to achieving human freedom.’
– Rashmi Venkatesan, National Law School of India Review

‘This is a highly literate work – its range of reference and depth of understanding are impressive. It is a book for scholars who wish for both a review of key theories of rights critiques and either an introduction to, or a revisiting of, scholarship that promises to push us beyond what we already think. The writing is rich; Kapur’s sentences are powerful and evocative. And, Kapur’s metaphor of the fishbowl is clever: helpful in a conversation involving high abstraction.’
– Margot Young, Law & Society Review

‘Ratna Kapur’s Gender, Alterity, and Human Rights: Freedom in a Fishbowl is an intellectual tour-de-force, fluently crossing into the fields of political theory, legal theory, international law, and international relations. The book will be a useful resource for long to come to both scholars and students in the fields of political theory, legal theory, gender and sexuality studies, human rights, and international relations. Its implications are applicable across a wide variety of areas of inquiry, both closely related to and further afield from the direct discussion of human rights from which Kapur constructs a theoretical framework. I would assign it to graduate classes in law, politics, and gender studies, and am likely to continue to revisit the rich text several times in the coming years, both for dialogue with my research work and to think about the vexing problem of acting while escaping liberalisms' unfreedoms.’
– Laura Sjoberg, Asia Pacific Law Review

‘Ratna Kapur’s latest book Gender, Alterity, and Human Rights: Freedom in a Fish Bowl masterfully tackles a normative claim that has been gaining increasing momentum over the last few decades: the human rights agenda has hit an impasse and needs serious transformation. Kapur writes with the assured confidence of the erudite theorist she is and her voice demands audience.’
– Feminist Legal Studies

‘In an elegantly written book, Ratna Kapur takes the critique of the human rights project a step further to make a case for alternative registers of freedom and emancipation.’
– Open Magazine

‘Long admired for her pioneering work on gender, neo-liberalism and human rights, in this volume Ratna Kapur builds on that scholarship to offer a bold and wide ranging set of arguments that will add immensely to the many current debates about human rights and their efficacy in this age of inequality. Kapur’s trenchant critique of rights and her vision of an alternative to the liberal concept of freedom offer strikingly original arguments that make this an indispensable volume for all who are interested in the future of human rights.’
– Tony Anghie, National University of Singapore and University of Utah, US

‘How is human freedom pursued and experienced outside the [neo]liberal fish bowl? Courageously defying the critical human rights orthodoxies of nihilism or repair, Kapur catapults from her own ground-breaking analyses of the damage inflicted in pursuit of gender and sexual rights calling for a radical rethinking of human rights advocacy, drawing from non-liberal traditions. She dares us to venture beyond the fishbowl by charting several escape routes offered by alternative non-western, counter-hegemonic epistemologies of freedom which prioritize rigorous self-inquiry, non-dualistic perspectives and inclusive dialogue.’
– Dianne Otto, Melbourne Law School, Australia

‘Ratna Kapur is one of the most important international legal scholars working today. Gender, Alterity and Human Rights is brilliant, provocative and ground breaking – I cannot think of any other book published today that centers radically ‘other’ approaches to political and ethical agency as the epistemological anchor for analysis of international law. She advances this ambitious new ground by showing how dominant approaches to human rights and feminism are themselves invested in political subjectivities and agendas that seek to redeem international law and authorize global governance. With theoretical rigor and a radical sensibility, she quarries through material as diverse as human rights case law and Sufi poetry to excavate the plurality of ways in which freedom is envisioned, challenged and inhabited.’
– Vasuki Nesiah, New York University, US

Contents
Contents: Prologue Introduction 1. Liberal Freedom in a Fishbowl 2. Precarious Desires and the Pursuit of Rights 3. Freedom, Women’s Rights and the Rise of the Sexual Security Regime 4. Alterity, Gender Equality and the Veil 5. Despair, Redemption and the Turn Away from Human Rights 6. Seeking Freedom through Alternative Registers 7. Freedom from the Fishbowl Epilogue Bibliography Index