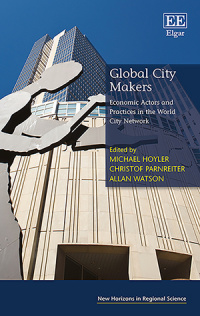 Economic Actors and Practices in the World City Network

This book conceptualizes global cities as places from where the world economy is managed and controlled, and discusses the significance of economic actors and their practices in the formation of the world city network. Focusing on financial services, management consultancy, real estate, commodity trading and maritime industries, the detailed case studies are located across the globe to incorporate major global cities such as London, New York and Tokyo as well as globalizing cities including Mexico City, Hamburg and Mumbai.

This ground-breaking book will appeal to a broad audience including scholars in urban studies, economic geography and international management as well as urban policy-makers and practitioners in globalizing firms.

Critical Acclaim
‘Ultimately, the book contributes to the global city and world cities discourse by introducing a relational economic geography perspective and setting a renewed research agenda centred on key economic actors and their practices. The contents of this book are not only relevant for academics, but also for those working within the realm of international management and urban policy‐making. This book should be on the reading list of anyone interested in understanding “the powers that be” within the process of global city making.’
– Kyle Farrell, Regional Science Policy & Practice

‘This is a truly refreshing take on the phenomenon of global cities. For far too long we’ve been seduced by the flows and networks that reproduce global cities without considering the actors, individuals, organisations, institutions, that make and shape the global-local dynamics of such spaces in global society. Throughout this collection of essays, there is a rich empirical narrative which reminds scholars of global city and urban studies that without the agency of actors, whether that be economic, political, cultural or social, any notion of flow and networks would simply wither on the vine. In short, this is a new benchmark on the geography of the global city in contemporary globalisation.’
–Jonathan V. Beaverstock, University of Bristol, UK

‘The novel contribution of the book is its engagement with global cities as specific types of spaces that are not only used by but also generated by the everyday practices of business actors. The essays introduce to the literature, diverse lenses shedding light on the process by which global business people make cities.’
– Kathy Pain, University of Reading, UK

‘By shifting the focus towards practices and agency, Global City Makers is a timely and important intervention that reflects the current state-of-the-art in theories of global city development. Bringing together leading authorities and up-to-date research on a diverse range of cities, it will surely represent a key reference in this field.’
– Andrew Jones, City, University of London, UK

1. Agency and practice in the making of global cities: towards a renewed research agenda
Michael Hoyler, Christof Parnreiter and Allan Watson

7. The making of Mumbai as a global city: investigating the role of the offshore services sector
Bart Lambregts, Jana Kleibert and Niels Beerepoot

9. Chasing the phantom of a ‘global end game’: the role of management consultancy in the narratives of pre-failure ABN AMRO
Michiel van Meeteren and David Bassens

Epilogue: Placing politics and power within the making of global cities
Sarah Hall