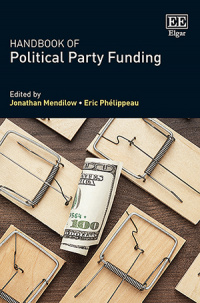 With contributions from both eminent international scholars and prominent representatives of the second generation of students in the field, this original and thought-provoking collection of current research updates our understanding of party funding regimes, while contributing to the re-examination of perennial and often problematic issues. It illustrates, using select empirical data, the range of alternative political finance structures, exposing both the limits of these regimes and their effects on parties, systems and on democratic competition. Offering diverse and detailed case studies, the chapters examine the stakes involved nationally, and the impact of financing on the political environment. At the same time, they present a picture of a field of study that is still establishing itself, offering direction for future research.

Students and academics of political science, public law and comparative politics will find this an essential reference for studying party funding and its wider influence. Members of political institutions and those fighting political corruption will find this an incredibly useful Handbook for understanding the positives and negatives of party funding globally
Critical Acclaim
‘This Handbook is the most important contribution over the past generation to the understanding of the role of money in politics – one of the thorniest issues for democracy today. The breadth and ambition of this book is only equaled by the rigor of the chapters, written by a stellar and global group of scholars. This is simply the best available survey of the knowledge accrued on the regulation of political finance across the world. But it is also a work of wisdom, which combines a sense of urgency with a nuanced view of political finance and the limits of regulation. This volume is destined to become a classic text in the field.’
– Kevin Casas-Zamora, Inter-American Dialogue, US

Part I Some issues in contention
1. Funding and Propaganda
Alix Meyer and Eric Phélippeau

7. Political Party Funding and the Enigma of Trust
Danielle May

Part II. The arena of party finance
9. Like Water on Pavement: Political Fundraising at the Sub-National Level – The New Jersey Example
Benjamin A. Dworkin

10. Party Finance at the Level of the European Union - Party Finance reform to vitalize the EU’s Proto-party system?
Wouter Wolfs and Jef Smulders