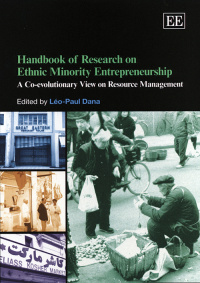 A Co-evolutionary View on Resource Management

The international contributors, key experts in their respective fields, illustrate that myriad ethnic minorities exist across the globe, and that their entrepreneurship can and does significantly influence national economies. The contributors go on to promote our understanding of which factors make for successful entrepreneurship, and, perhaps more importantly, how negative political consequences that members of successful entrepreneurial ethnic minorities might face can be minimized.

This extensive collection of current research on entrepreneurship in minority communities is a welcome addition to the growing literature and will be warmly welcomed by those with an interest in entrepreneurship, sociology and business in general.
Critical Acclaim
‘Professor Dana and his colleagues have carefully and successfully put together a collection of chapters on ethnic minority entrepreneurship from all parts of the world. The book comprises eight parts and 49 chapters. Undoubtedly, given the massive size and content of a 835-page book, it is fair to ask, is it value for money? The answer is unequivocally yes! A further comment on the content of the book should probably reassure potential readers and buyers of the book. . . This collection is undoubtedly rich, creative and varied in many respects. Therefore, it will be of great benefit to researchers and scholars alike. . . I will strongly recommend this book to researchers, students, teachers and policy-makers.’
– Aminu Mamman, International Journal of Entrepreneurial Behaviour and Research

‘The volume presents an impressive panorama of studies on ethnic entrepreneurships ranging from Dalits in India to Roma entrepreneurs in Hungary.’
– B.P. Corrie, Choice

‘From a focus on middle-man minorities in the 1950s, the study of minority ethnic entrepreneurship has evolved into a vast undertaking. A major ingredient in this expansion is the massive population movements of the past thirty years that have created ethnic minority communities in almost all advanced economies. From New York to San Francisco, from Birmingham to Hamburg, from the Chinese in Canada, to the Turks in Finland, to the Ghanians in South Africa to the Lebanese in New Zealand, more than twenty chapters in this volume treat small-scale ethnic entrepreneurship and the cultural and institutional resources which support it. At the other end of the spectrum, the ethnic Chinese have created ever larger multi-divisional enterprises in the host societies of Southeast Asia. At the mid-point of the spectrum, analyzed in an elegant paper by Ivan Light, is the recently identified transmigrant entrepreneur – accultured in two societies but assimilated in neither – whose special endowments have provided the lynchpin for for much of the international trade expansion in the global economy over the past decade. And Dana and Morris provide us with much more Afro-American entrepreneurship, caste and class, the theory of clubs, women ethnic entrepreneurs, minority ethnicity and IPOs. In the quality of its contributions and in the reach of its coverage, this Handbook attains a very high standard.’
– Peter Kilby, Wesleyan University, US

11. Toward a Rethinking of Race, Culture and the African American Entrepreneur
Nicholas Maurice Young

15. The Iranian Ethnic Economy in the United States
Mohsen Mobasher

19. The Rise and Fall of Specialized Small Business Investment: Taking the Taxi to Oblivion
Milford B. Green and Rod B. McNaughton

20. Does Ethnicity Matter? A Study of the Strategic Intent of Internet Ventures Founded by Ethnic and ‘Non-Ethnic’ Entrepreneurs
Rajeswararao (Raj) Chaganti, Radha Chaganti and Monica Treichel

22. Temporal and Geographical Variations in Ethnic Minority Business: Thirty Years of Research in the United Kingdom
Giles A. Barrett and David McEvoy

36. Dalit Entrepreneurs on the Edges of Caste and Class: Ethnic Minority Entrepreneurship in India
David Blake Willis and J. Rajasekaran

41. Clan Associations of Singapore and their Roles in the Small Business Sector
David Leong

44. Exploring the Relationship Between Culture, Communication and Entrepreneurship in New Zealand
Zhu Yunxia

PART VI: COMPARATIVE STUDY
48. A Comparative, Exploratory Investigation into the Perceptions of Internationalizing Firms in Singapore and the UK
Dave Crick and Léo-Paul Dana

PART VII: TOWARDS FUTURE RESEARCH
49. Towards a Synthesis: A Model of Immigrant and Ethnic Entrepreneurship
Léo-Paul Dana and Michael Morris

Leading Innovation and Entrepreneurship in Healthcare