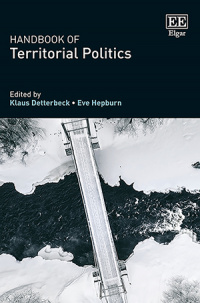 9781784718763 Edward Elgar Publishing
Edited by Klaus Detterbeck, Senior Researcher, Institute of Political Science, Georg-August-University Göttingen, Germany and Eve Hepburn, Honorary Fellow at the University of Edinburgh’s Europa Institute, Founding Chief Executive of Fearless Femme and Founding Director of PolicyScribe, UK
Publication Date: 2018 ISBN: 978 1 78471 876 3 Extent: 432 pp
The study of territorial politics has enjoyed a renaissance in the last thirty years. Scholars have questioned the state-centric assumptions upon which mainstream social science has been built, pointing to the territorial (re)distribution of power across and within states.

This Handbook brings together leading scholars to demonstrate how territory has shaped institutional structures, public policies, elections, political parties, and identity across the world. Offering theoretical, comparative and empirical insights, this book provides a comprehensive overview of the impact of territory on modern political, economic and social life.

More Information
Critical Acclaim
Contributors
Contents
More Information
Territory continues to be an essential part of modern political discussion, evidenced in the recent decentralization of state structures and rise of sub-state nationalist and regionalist parties. With extensive empirical evidence alongside contemporary theory, this multidisciplinary Handbook makes the case for an outright rejection of state-centric views on territorial politics.

Incorporating public policy, comparative politics, multilevel governance and political geography, this Handbook provides scholars and students with a compelling collection on territorial politics that will prove invaluable.
Critical Acclaim
‘This Handbook is definitely a must read both for students and scholars of territorial politics.’
– Kévin Vercin, European Review of International Studies

‘This book is an important contribution to the field, bringing together
some of the most prominent thinkers in this field. The book will be a valuable addition for established scholars seeking an overview of the field to keep within arm’s reach, as well as postgraduate students working to get to grips on the latest thinking and ideas as they embark upon their research. Lecturers might also find the individual chapters useful for undergraduate and postgraduate teaching, as they provide up-to-date and accessible discussions of some of the key issues.’
– Coree Brown-Swan, Regional & Federal Studies

1. Introduction to the Handbook of Territorial Politics
Eve Hepburn and Klaus Detterbeck

3. Federal, Devolved or Decentralized State – on the Territorial Architecture of Power
Nathalie Behnke

4. Challenges of Interdependence and Coordination in Federal Systems
Nicole Bolleyer

7. Decentralization as a Tool for Conflict Resolution
Soeren Keil and Paul Anderson

14. Regional Citizenship in a System of Plural Memberships and Multilevel Rights
Lorenzo Piccoli

19. Regions beyond the State: External Relations and Paradiplomacy
Michaël Tatham

20. Comparative Perspectives on the Territorial Politics of Fiscal Federalism: Canada, Australia, and the United States.
Daniel Béland and André Lecours

Part IV: Geographical Perspectives
23. Actor-Centered or Institutional Approaches in Europe and the US: Moving toward Convergence
Carol S. Weissert and Kevin Fahey

26. Territorial Politics and the Federal Frame in Australia
Nicholas Aroney and Campbell Sharman