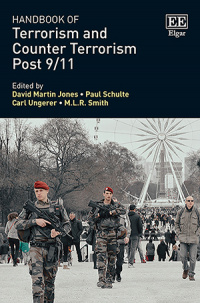 9781786438010 Edward Elgar Publishing
Edited by David Martin Jones, Visiting Professor, Department of War Studies, King’s College London and Honorary Professor, Humanities Research Institute, University of Buckingham, UK, Paul Schulte, Honorary Professor, Institute for Conflict, Cooperation and Security, School of Government and Society, University of Birmingham, UK, Carl Ungerer, Senior Associate, Cognoscenti Group, Sydney, Australia and M.L.R. Smith, Professor of Strategic Theory, Department of War Studies, King's College London, UK
Publication Date: 2019 ISBN: 978 1 78643 801 0 Extent: 456 pp
Almost two decades after the events of 9/11, this Handbook offers a comprehensive insight into the evolution and development of terrorism and insurgency since then. Gathering contributions from a broad range of perspectives, it both identifies new technological developments in terrorism and insurgency, and addresses the distinct state responses to the threat of political, or religiously motivated violence; not only in the Middle East and Europe, but also in Africa, South and Southeast Asia, and North and South America.

More Information
Critical Acclaim
Contributors
Contents
More Information
The events of 9/11 gave rise to a new epoch in world history. This Handbook examines how the world order and our understanding of war and peace has been transformed since the global war on terror began.

Bringing together expert commentators and academics from Asia, US, Europe and the Middle East, the Handbook of Terrorism and Counter Terrorism Post 9/11 assesses regional responses to terrorism and evaluates the emergence of new threats. This timely reflection on the consequences of the global war on terror considers the future of asymmetric conflict in the context of the fourth industrial revolution, and the evolution of cyberwarfare.

Providing an analysis of terrorism since 2001, from Al-Qaeda to Daesh, and a critical evaluation of counter terrorism and counter insurgency, this Handbook is an essential primer for students, at all levels, researching terrorism, insurgency, global warfare and international relations. It will also benefit defence and security personnel enrolled on postgraduate courses in military academies.

Critical Acclaim
‘All in all, this Handbook of Terrorism and Counter Terrorism Post 9/11 is a welcome addition to existing efforts to survey the field of (counter-)terrorism studies. No university library should be without it.’
– Alex P. Schmid, Perspectives on Terrorism

‘Prescient, probing and provocative, this Handbook of Terrorism and Counter Terrorism Post 9/11 is a timely and welcome addition to the literature. It gathers in one volume the research and assessments of some of the field's best and sharpest scholars to render a reappraisal of the struggle against this continuing threat.’
– Bruce Hoffman, Georgetown University, US, author of Inside Terrorism

‘The Handbook of Terrorism and Counter Terrorism Post 9/11 represents an impressive intellectual balance between presenting a global overview of the subject and providing insightful regional analyses of how different terrorist movements actually operate. It is surely the most comprehensive single volume currently available in the field of terrorism studies and is highly recommended.’
– Michael Evans, Australian Defence College

1 Introduction to the Handbook of Terrorism and Counter Terrorism Post 9/11 1
David Martin Jones and M.L.R. Smith