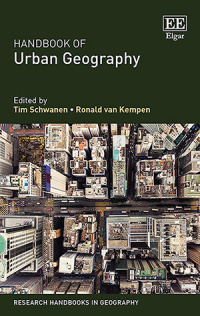 9781785364594 Edward Elgar Publishing
Research Handbooks in Geography series
Edited by Tim Schwanen, School of Geography and the Environment, University of Oxford, UK and the late Ronald van Kempen, formerly Utrecht University, the Netherlands
Publication Date: 2019 ISBN: 978 1 78536 459 4 Extent: 512 pp
This collection brings together the latest thinking in urban geography. It provides a comprehensive overview of topical issues and draws on experiences from across the world. Chapters have been prepared by leading researchers in the field and cover themes as diverse as urban economies, inequalities and diversity, conflicts and politics, ecology and sustainability, and information technologies. The Handbook offers a valuable resource for students and researchers interested in cities and the urban in geography and across the wider social sciences.
Awarded Choice Outstanding Academic Title for 2020

More Information
Critical Acclaim
Contributors
Contents
More Information
This Handbook provides an authoritative overview of the diversity of contemporary geographical research on cities and urbanization. It demonstrates the vibrancy of current research, and the exciting future of the field. Bringing together different philosophical, theoretical, and methodological approaches to the study of the city and the urban, chapters incorporate elements from different disciplines with international perspectives to create an extensive reference on contemporary urban geography research.

The Handbook of Urban Geography consists of thirty chapters written by the leading experts and recognized specialists in the field. Organized into seven parts, this Handbook explores recent theories and methodologies, urban networks, redevelopment, inequality, socialities in the city, urban politics, and sustainability. Recognizing the interdisciplinary nature of the field, contributing authors are from across disciplinary boundaries, expanding the horizons for future geography research.

Researchers and academics in geography, urban studies, and related disciplines will find this Handbook offers succinct overviews of recent developments in the literature. Graduate and undergraduate students will also find this an accessible and useful reference work.

Critical Acclaim
‘The Handbook provides a comprehensive selection over the most important scholarly approaches and debates since the turn of the century. In a crowded field, the Handbook should be of value for both academics and students in the fields of human geography, urban studies, planning, or urban sociology.’
– Jörg Plöger, Eurasian Geography and Economics

‘This book was written and edited with a great passion for the content world of urban geography. The chapters are not long, enabling a reading of the different sections in a single sitting. The book’s first goal - to present the discipline in its various colors - is fully achieved. The authors maintain that the book is intended for research students at various stages, and this is in fact the case. Indeed, as I read through it, I found myself giving chapters and conveying insights to the research students I am currently advising. This is a manifestation of the book’s strength: its systematic presentation of core topics. The classics of the field are also dealt with nicely, and the book offers definitions of a broad spectrum of basic concepts in urban geography. In this way, the book provides a wonderful service for lecturers teaching basic and advanced courses in urban geography, as well as neighboring disciplines such as urban sociology.’
– Meirav Aharon-Gutman, Geography Research Forum

‘For more than half a century, urban geography has led revolutions in social theory and spatial analysis. How do we make sense of the latest transformations of cosmopolitan planetarity and urban socionatural evolution? This Handbook is the essential guide through the diverse empirics and epistemological pluralism of contemporary urban worlds. We need to read, reflect, and act on every chapter in this valuable collection.’
– Elvin Wyly, The University of British Columbia, Canada

Preface
Introduction to the Handbook of Urban Geography
Tim Schwanen

3. Urban political ecologies of and in the city
Joshua J. Cousins and Joshua Newell

15. Terrorism, risk and the quest for urban resilience
Jon Coaffee

22. Spaces of encounter: learning to live together in superdiverse cities
Nick Schuermans

26. The right to the city: theoretical outline and reflections on migrants’ activism in post-reform urban China
Junxi Qian and Shenjing He