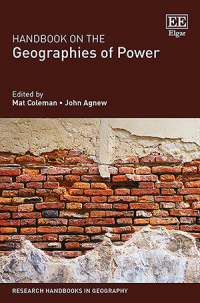 9781785365638 Edward Elgar Publishing
Research Handbooks in Geography series
Edited by Mat Coleman Professor, Department of Geography, The Ohio State University, Columbus, Ohio and John Agnew, Distinguished Professor of Geography, Department of Geography, University of California, Los Angeles, US
Publication Date: 2018 ISBN: 978 1 78536 563 8 Extent: 432 pp
The so-called spatial turn in the social sciences means that many researchers have become much more interested in what can be called the spatialities of power, or the ways in which power as a medium for achieving goals is related to where it takes place. Most famous authors on the subject, such as Machiavelli and Hobbes, saw power as entirely equivalent to domination exercised by some over others. Though this meaning is hardly redundant, understandings of power have become more multidimensional and nuanced as a result of the spatial turn. Much recent writing in human geography, for example, has rigorously extended use of the term power beyond its typical understanding as a resource that pools up in some hands and some places to a medium of agency that has different effects depending on how it is deployed across space and how actors cooperate, or not, to give it effect. To address this objective, the book is organized thematically into four sections that cover the main areas in which much of the contemporary work on geographies of power is concentrated: bodies, economy, environment and energy, and war.