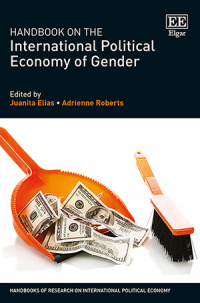 Handbook on the International Political Economy of Gender

9781783478835 Edward Elgar Publishing
Handbooks of Research on International Political Economy series
Edited by Juanita Elias, Reader in International Political Economy, University of Warwick and Adrienne Roberts, Senior Lecturer in International Politics, The University of Manchester, UK
Publication Date: 2018 ISBN: 978 1 78347 883 5 Extent: 544 pp
This Handbook brings together leading interdisciplinary scholarship on the gendered nature of the international political economy. Spanning a wide range of theoretical traditions and empirical foci, it explores the multifaceted ways in which gender relations constitute and are shaped by global politico-economic processes. It further interrogates the gendered ideologies and discourses that underpin everyday practices from the local to the global. The chapters in this collection identify, analyse, critique and challenge gender-based inequalities, whilst also highlighting the intersectional nature of gendered oppressions in the contemporary world order.

More Information
Critical Acclaim
Contributors
Contents
More Information
This comprehensive Handbook showcases the burgeoning and cutting edge research that has come to constitute the study of gender and International Political Economy (IPE). It surveys the diversity of contemporary feminist IPE research, exploring a range of different theoretical and methodological traditions and reviewing the broad empirical scope of this research. The Handbook also critically interrogates the intersections and points of tension between the different disciplines that have inspired contemporary approaches.

Expert contributors offer insights into how to the categories of ‘masculine’ and ‘feminine’ have been established and maintained globally, while also documenting and challenging the privileging of the former over the latter in different sites and spaces. They further show how gender power relations are shaped by race, nationality, sexuality, class, and more. The Handbook explores and demonstrates how gender operates as a relation of social power in the global political economy.

The Handbook on the International Political Economy of Gender will appeal to undergraduate and post-graduate students of politics and international relations, security studies, development studies, economics, and gender and queer studies, as well as policymakers and practitioners interested in issues of global (in)equality and development.

Critical Acclaim
‘The book makes more than one important contribution. First, it brings together a vast array of scholarship in feminist IPE that demonstrates cutting-edge knowledge. Second, it challenges mainstream IPE and, third, it will become an important teaching tool for those of us who have been looking for a handbook such as this for a long time.’
– Amanda Gouws, South African Journal of International Affairs

‘The book is an invaluable – in fact, unique – resource for those interested in gender and international political economy, and the range of work it showcases is useful for both teaching and research purposes.’
– Kate Bedford, Gender & Development

‘The Handbook on the International Political Economy of Gender is an important and carefully considered intervention aimed to bring in a more plural understanding of gender into the expanding scholarship on IPE.’
– Divya Solomon, Progress in Development Studies

‘This rich collection provides ample evidence that the interdisciplinary field of feminist International Political Economy has come into its own. It showcases the diversity of theoretical influences, methods of analysis, political engagements, and topic areas that make up the field. It also highlights the strength of the feminist revision of IPE for challenging contemporary issues and inequities. Building on the most recent feminist research, this engaging and thought-provoking Handbook is of great value to scholars, students and practitioners alike.’
– Suzanne Bergeron, University of Michigan, Dearborn, US

‘In their Handbook of the International Political Economy of Gender, Juanita Elias and Adrienne Roberts offer a collection that not only provides an overview of the "state of the art" in ongoing IPE gender studies debates, but also highlights avenues for theoretical advance and future research. In addition to offering incisive critiques of conventional IPE approaches, this collection highlights the diversity of Feminist IPE perspectives themselves, across disciplinary, theoretical and subfield divides – and so stands to advance gendered IPE analyses specifically, and IPE debates more generally across, our entire field.’
– Wesley W. Widmaier, Griffith University, Australia

‘Elias and Roberts have pulled off quite a feat: they have made a Handbook exciting. This collection is packed with up-to-the-minute feminist international political economy findings. Each contributor knows the current debates and why every one of these (often fierce) debates matters.’
– Cynthia Enloe, author of The Big Push: Exposing and Challenging Persistent Patriarchy

2. The Production of Life Itself: Gender, Social Reproduction and IPE
Meg Luxton

8. A Feminist Institutionalist Approach to IPE and Gender
Georgina Waylen

13. The Political Economy of Post-Conflict Violence against Women
Jacqui True

14. Perspectives on Private Security: The Myth, the Men and the Markets
Amanda Chisholm

22. The World Bank and the Challenge of ‘the Business Case’ for Feminist IPE
Sydney Calkin

23. Gender Mainstreaming at the European Bank for Reconstruction and Development
Sara Wallin

29. Migrant and Domestic and Care Workers: Unfree Labour, Crises of Social Reproduction, and the Unsustainability of Life under ‘Vagabond Capitalism’
Sedef Arat-Koç

34. The Global Political Economy of Beauty
Angela B. V. McCracken