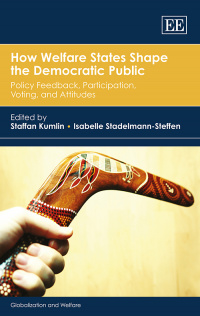 Staffan Kumlin and Isabelle Stadelmann-Steffen bring together political scientists and sociologists from different and frequently separated research communities to examine policy feedback in European welfare states. In doing so, they offer a rich menu of methodological approaches. The book demonstrates how long-term policy legacies and short-term policy changes affect the public, but also shows that such processes are contingent on individual characteristics and political context.

This comprehensive study will appeal to academics interested in political behaviour and attitudes, or in welfare state policy and its consequences for national societies and economies. It will also be of value to policy intellectuals and activists involved in the politics of the welfare state.
Critical Acclaim
‘Welfare states do indeed shape the democratic public, but they do it in highly contingent and contextually dependent ways. This is the main message from this meticulously researched and lucidly presented volume. By showing how and under what conditions policy feedback takes place it makes a major contribution to the welfare state literature. A must-read for any scholar in the field.’
– Stefan Svallfors, Umeå University, Sweden

‘Every chapter of this book is full of rigorous research and interesting results, and its contents should be carefully absorbed by any policy-maker contemplating a transition from means-tested to universal benefits.’
– Citizens Income

8. Waking up the Giant? Hospital Closures and Electoral Punishment in Sweden
Anders Lindbom

12. Popular Deservingness of the Unemployed in the Context of Welfare State Policies, Economic Conditions and Cultural Climate
Wim van Oorschot and Bart Meuleman