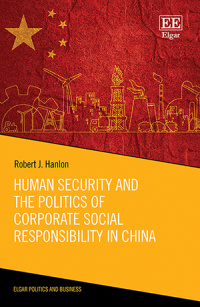 Human Security and the Politics of Corporate Social Responsibility in China

By assessing how social responsibility is changing the discourse around trade, development and diplomacy, Hanlon sheds light on how competing visions of social responsibility are influencing political narratives in China and the West, examining multipolarity, the construction of Global China, and the ascent of competitive pluralism. Chapters argue that the liberal economic order founded at Bretton Woods is wavering with Western governments and multinational corporations who are seeking new strategies to compete against China, especially in emerging economies known for weak governance structures and dysfunctional rule of law. As CSR emerges as a political tool for states and business actors, this timely book adopts a human security approach for assessing the weaponization of political values within an increasingly fragmented rule-based liberal order.

Expanding on the themes of constructivism, competitive pluralism and progressive neoliberalism, while introducing the novel concept of developmental CSR, this forward-thinking book will prove a vital resource for students, scholars and policymakers interested in Asian politics, public policy, CSR and international relations.

Critical Acclaim
‘Professor Hanlon has written a theoretically informed and empirically researched work that does what the title suggests: integrates the concepts of human security and corporate social responsibility in China. It is grounded in contemporary theoretical debates and demonstrates an impressive knowledge of Chinese practices in the realm of CSR and human rights. Highly recommended for students and scholars of Chinese economic development generally.’
– David Detomasi, Queen’s University, Canada

‘Through a careful survey of the rise of CSR in China’s domestic and international agendas, Robert Hanlon explores business ethics as not just a feature of corporate branding or a site of developmental struggle, but also as a state legitimizing tool against the backdrop of the multipolar world order of globalised capitalism.’
– Ruben Gonzalez-Vicente, University of Birmingham, UK

‘This timely book helps explain how China’s economic and political interests are shaping understandings of corporate social responsibility within China, and around the world. It should prove useful to those working in the fields of business and society, global governance, human rights, and political corporate social responsibility.’
– Glen Whelan, Université du Québec à Montréal, Canada

A Research Agenda for Sustainability and Business