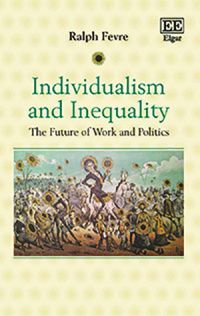 The Future of Work and Politics

9781784716523 Edward Elgar Publishing
Ralph Fevre, Professor of Social Research, School of Social Sciences, Cardiff University, UK
Publication Date: 2017 ISBN: 978 1 78471 652 3 Extent: 320 pp
A belief in individual self-determination powered the development of universal human rights and inspired social movements from anti-slavery to socialism and feminism. At the same time, every attempt to embed individualism in systems of education and employment has eventually led to increased social inequality. Across the globe individualism has been transformed from a revolutionary force into an explanation for increasingly unequal societies where dissent is largely silent. This book explores the possibility of rediscovering the original, transformative potential of individualism.

Ralph Fevre demonstrates that a belief in individual self-determination powered the development of human rights and inspired social movements from anti-slavery to socialism, feminism and anti-racism. At the same time, every attempt to embed individualism in systems of education and employment has eventually led to increased social inequality. The book discusses influential thinkers, from Adam Smith to Herbert Spencer and John Dewey, as well as the persistence of discrimination despite equality laws, management and the transformation of individualism, individualism in work and mental illness, work insecurity and intensification.

This multi-disciplinary book will be essential reading for students and scholars of sociology, economics, philosophy, political science, management science and public policy studies, among other subjects. It will also be of use to policymakers and those who want to know how the culture and politics of the neoliberal world are unfolding.

Critical Acclaim
‘Suitors would be wrong to see this book as just another study of modern-day inequality. It offers far more insight than other books on this topic. Broadly, it is about two related trends: the decline of belief in human qualities and human potential expressed through forms of collective identity and the expansion of rationalisation and scientific knowledge into the domains previously occupied by belief (in education for example). Fevre describes this as the shift from sentimental individualism to cognitive individualism, tracing the origins of the former back to Thomas Paine and Adam Smith and the latter to Herbert Spencer among others. But there is far more to his analysis than this. With the rise of the narratives of globalisation and neoliberalism, Fevre shows how our own sense of self and agency has narrowed from aspirations for social change to anticipation of self-actualisation in the workplace. He describes how employers have embraced neoliberal ideals and increasingly take on responsibility for the welfare and self-development of employees, but then fail to live up to the increased expectations. Drawing on empirical studies, Fevre documents the psychological and other impacts on workers as the neoliberal workplace fails to provide them with the self-determination and self-actualisation it promises. It is concerning to learn how much the “cognitive individual” defers to institutions and organisations to act on their own behalf rather than taking matters into their own hands. Fevre wisely encourages us to look for opportunities to rekindle moral meaning by reviving belief in human qualities rather than in the discourse of neoliberalism.’
– Alex Standish, University College London/Institute of Education, UK

‘With the publication of Individualism and Inequality, Ralph Fevre establishes himself as one of today’s most important figures in social theory and economic and cultural sociology. Building on his past work, his newest book skillfully brings together social theory, history, political philosophy, public policy and normative inquiry to tell a bold, new story about the rise of neoliberalism in the US and in the UK. Fevre produces nuanced genealogies of various forms of individualism and convincingly argues that the rise of neoliberalism is directly connected to the eclipse of sentimental individualism by cognitive individualism. In spite of the formidable social problems, including income inequality, that Fevre’s account vividly depicts, he concludes his book with a ray of hope for a social movement that could bring the revitalization of sentimental individualism.’
– Mark S. Cladis, Brooke Russell Astor Professor of the Humanities, Brown University, US

'This is a wonderful holdall of an interdisciplinary book. We could call its content history, sociology, political economy, economic geography, economics, and social policy: and it is packed full of fascinating detail.'
– Citizens Income

‘Individualism and Inequality is an interdisciplinary work that will be of interest to scholars from several fields, including political theory, education, history, psychology, and management. It brings together these areas to create an interesting narrative of the development of neoliberalism in the USA and UK. Fevre’s detailed historical and theoretical analyses are interesting and insightful.’
– Equality, Diversity and Inclusion: An International Journal
Contents
Contents: 1. Neoliberalism Takes Over 2. Anti-slavery and the Secret of Human Rights 3. Adam Smith and American Individualism 4. Inequality, Welfare and the Cultivation of Character 5. American Ideology: Millennium and Utopia 6. Classes and Evolution 7. Sowing the Seeds of Neoliberalism 8. Education, Individualism and Inequality 9. An Introduction to People Management 10. From ‘Stupid’ to ‘Self-actualizing’ Workers 11. The Neoliberal Settlement 12. The Apotheosis of Individualism at Work 13. The Hidden Injuries of Cognitive Individualism 14. Insecurity, Intensification and Subordination 15. The Future of Work and Politics Index