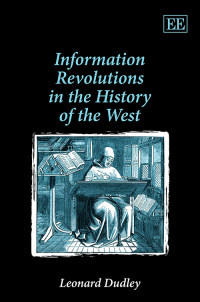 Information Revolutions in the History of the West

9781847207906 Edward Elgar Publishing
Leonard Dudley, Professor of Economics, Université de Montréal, Canada
Publication Date: 2008 ISBN: 978 1 84720 790 6 Extent: 360 pp
With detailed case studies addressing the sources of innovation in information technology, along with a conceptual framework to explain their effects, this book will be of interest to students and teachers of Western economic and social history, as well as to the general reader with an interest in the social impact of innovation.

More Information
Critical Acclaim
Contents
More Information
Can new information technologies explain the discontinuities in the history of the West? This innovative book presents evidence of an overall pattern generated by radical changes in media, arguing that the major social revolutions in the West have been preceded by innovations that drastically alter the relative importance of informational scale economies (the impact of production volume on unit cost) and network effects (the gain to each member of a network when a new agent joins). These factors establish the optimal structure of a society by determining whether decision-making is centralized, decentralized or instead distributed across multiple agents. Dudley contends that an innovation that alters the balance between scale economies and network effects initially has a dramatic result, blasting apart existing interpersonal networks; however later, out of the debris, a new society emerges.

The latest of these innovations – the integrated circuit – is currently generating a wave of creative destruction that is spilling over into the rest of the world. To understand the rebirth that seems likely to follow, we must examine not the recent past but the Dark Ages of European history and the intervening centuries.

With detailed case studies addressing the sources of innovation in information technology, along with a conceptual framework to explain their effects, this book will be of interest to students and teachers of Western economic and social history, as well as to the general reader with an interest in the social impact of innovation.
Critical Acclaim
‘. . . a well-researched and well-written book, with some nice anecdotal detail and a crisp turn of phrase. The contextual detail of events is excellent.’
– Toni Weller, Library and Information History

‘In this tour de force, Leonard Dudley makes a persuasive and exciting case that changes in information and communication technologies were a driving force behind a series of political, social, and economic transformations over the last millennium, starting with the collapse of the Carolingian Empire and ending with the dissolution of the Soviet block. His case that the relevant ICT change was an important cause in each transformation seems overwhelming to me, while his more contentious implied case that each was the prime cause deserves serious consideration.’
– Richard Lipsey, Simon Fraser University, Canada

‘Readers who love sweeping history, bold ideas, and provocative arguments will find a treasure trove here. Dudley examines major revolutions in communications technology – standardized written script, printing, radio/TV, and the internet – and demonstrates their impact on how societies have been organized throughout history. Taking us from Charlemagne’s Empire and the Norman invasion of England to the collapse of communism and the rise of post-9/11 global terrorism, Dudley demonstrates how innovations in communications have moved states and empires.’
– Jack A. Goldstone, George Mason University, US
Contents
Contents: Preface Introduction Part I: The Contractual Revolution 1. Words and the Man 2. The Ring of Cities Part II: The Consensual Revolution 3. The Counter-Attack of the Clones 4. King, Lords and Commons Part III: The Pre-emptive Revolution 5. Printing with Steam 6. Instant Information Part IV: The Prescriptive Revolution 7. The Circulation War 8. The Self-fulfilling Prophecy Part V: Another Contractual Revolution 9. The Decentralization of Desire Conclusion Epilogue References Index
Add to Wish List
eBook for individuals
978 1 84844 280 1
From £25.00
Click here for options
eBook for library purchase
978 1 84844 280 1
View sample chapter and check access on: