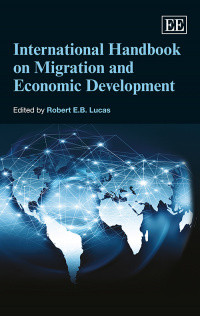 More Information
Critical Acclaim
Contributors
Contents
More Information
Migration and economic development are mutually linked. Development is a catalyst for migration and vice versa. However, the signs of causal links in both directions remain widely disputed, prompting questions about the reciprocity between the two.

This Handbook summarizes the state of thinking and presents new evidence on various links between international migration and economic development, with particular reference to lower-income countries. The connections between trade, aid and migration are critically examined through global case studies. Some of the topics covered include:

• an examination of the economic roots of international terrorism.

The various chapters extend our frontiers of understanding with fresh evidence, providing a useful reference point for researchers, students and policymakers interested in development and migration.
Critical Acclaim
‘This book addresses a largely unresolved mirror question. Does migration cause development or the other way around? As the contributors show, the compromise idea that they are mutually constitutive depends on a careful examination of the forms of migration (temporary, circular, permanent or return), the role of the destination and origin states and the ways in which remittance income has been deployed. Robert Lucas has assembled an excellent team of established and up-and-coming economists who address these issues in this instructive Handbook.’
– Robin Cohen, University of Oxford, UK

3. The Economic History of Migration: The Pre-World War One United States as Lens
Robert A. Margo

5. The Discourse and Practice of Co-development in Europe
Flore Gubert

9. Emigration and Wages in Source Countries: A Survey of the Empirical Literature
Prachi Mishra

11. The Migration-Trade Link in Developing Economies: A Summary and Extension of Evidence
Robert E.B. Lucas