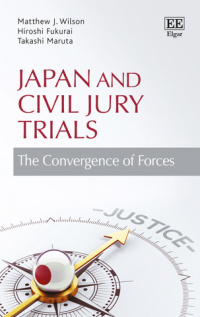 The Convergence of Forces

More Information
Critical Acclaim
Contents
More Information
With effective solutions in both criminal and civil disputes at a premium, reformers have advanced varied forms of jury systems as a means of fostering positive political, economic, and social change. Many countries have recently integrated lay participation into their justice systems, and this book argues that the convergence of current forces makes this an ideal time for Japan to expand lay participation into its civil realm.

This book offers a detailed examination of the historical underpinnings of citizen participation in Japan’s justice system, and analysis of new reforms related to Japan’s adoption of its saibanin seido or quasi-jury “lay judge system” for serious criminal trials in 2009. Its vivid and groundbreaking research includes an exploration of civil jury trials held in Okinawa after World War II, discussion of citizen participation and its potential impact on environmental civil lawsuits after the Fukushima nuclear disaster, and lessons about jury trials based on the experience of the United States and the recent proliferation of citizen involvement in the justice system around the world.

This cutting-edge book project will fascinate legal scholars and students as well as practitioners, political activists, organizations, and policymakers who are interested in citizen participation in Japan and other countries around the world, as it addresses societal harms perpetrated by the government or other entities, judicial reforms, democratic movements, and global justice.

Critical Acclaim
‘The recent development of lay participation is one of the most significant reforms in Japanese legal history. This volume makes a strong case for its extension to civil juries and beyond. Powerfully argued, and making skillful use of comparative evidence, these three leading scholars have produced a volume that will shape the debate for years to come.’
– Tom Ginsburg, The University of Chicago Law School, US

“The jury system continues to grow in popularity across the globe, and this book takes us inside the emergence of civil juries in Japan. The author provides rich detail but also recognizes the limitations of the current system. Anyone interested in understanding the challenges and promise of adopting new jury systems can learn much from this careful study, which weaves together historical, legal, and social scientific analyses.’
– John Gastil, lead author of The Jury and Democracy
Director, McCourtney Institute for Democracy, Penn State University, US

‘This book is a lucid and engaging account of the development and functioning of Japan’s system of lay participation in criminal trials, but equally, and perhaps more important, the authors provide solid arguments for the expansion of lay participation in Japanese civil disputes, and they outline how such a system might be developed. The book will also be useful for scholars and practitioners in other Asian countries interested in developing lay participation in their legal systems.’
– Neil Vidmar, Duke University School of Law, US