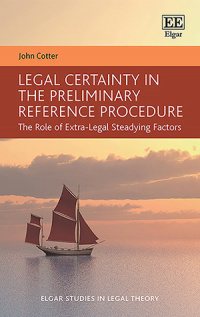 The Role of Extra-Legal Steadying Factors

More Information
Critical Acclaim
Contents
More Information
This forward-thinking book examines numerous features in the European Union (EU) legal system that serve to reduce legal uncertainty in the preliminary reference procedure and the rulings of the Court of Justice. Drawing on theories from legal realist Karl Llewellyn, legal steadying factors such as legal doctrine and interpretative techniques are reviewed alongside the primary focus of this book, extra-legal steadying factors.

As well as focusing on the contribution made by judges’ legal backgrounds, John Cotter also investigates the role of the balance between institutional and personal independence and accountability. He further applies Karl Llewellyn’s approach and re-models it into a European setting, identifying the EU legal system features that assist in promoting decisional steadiness in the preliminary reference procedure.

Exploring also the significance of procedural rules and practices at the Court of Justice in steadying outcomes, this book will be an excellent resource for scholars of the EU legal system. Its analysis of the role of factors that steady the rulings of the Court of Justice of the European Union will also make this a useful read for legal theorists interested in examining the factors that influence judicial decision-making.

Critical Acclaim
‘Scholars of EU law have long neglected the works of American legal theorists, and the value they possess for establishing stronger insights into the EU legal order. In utilising the work of Llewellyn, and applying it to a European judicial setting, this book by Cotter is a remarkable piece of scholarship in EU legal theory, and on the judicial nature of the Court of Justice of the European Union.’
– Graham Butler, Aarhus University, Denmark

‘How can legal certainty be ensured in the preliminary rulings procedure? Drawing on the work of Karl Llewellyn, John Cotter’s important book identifies certain “steadying factors” that can help in the search for robust judicial outcomes. It will appeal to anyone interested in the CJEU and EU law more broadly.’
– Anthony Arnull, University of Birmingham, UK
Contents
Contents: Preface PART I INTRODUCTION 1. Obstacles to Legal Certainty in the Preliminary Reference Procedure 2. ‘Steadying Factors’ in the Article 267 TFEU Preliminary Reference Procedure 3. ‘The Argument and ‘First Principles’ PART II INTERNAL EXTRA-LEGAL STEADYING FACTORS 4. The Steadying Effect of ‘Law-Conditioned Officials’ 5. ‘The Judges of the Court of Justice and ‘Law Conditioning’ PART III EXTERNAL EXTRA-LEGAL STEADYING FACTORS 6. The Steadying Effect of an Independence–Accountability Balance: A Hypothesis 7. ‘Susceptibility to Countermeasures for ‘Scenario 1’ (‘Legal and Acceptable’) Rulings 8. Susceptibility to lawful countermeasures for ‘scenario 2’ (‘legal’, but ‘unacceptable’) rulings 9. Susceptibility to Unlawful Countermeasures for ‘Scenario 2’ (‘Legal’, but ‘Unacceptable’) Rulings 10. Susceptibility to Countermeasures for ‘Scenario 3’ (‘Illegal’, but ‘Acceptable’) and ‘Scenario 4’ (‘Illegal’ and ‘Unacceptable’) Rulings PART IV PROCEDURAL EXTRA-LEGAL STEADYING FACTORS 11. The Order for Reference as ‘Steadying Factor’ I: ‘Issues Limited, Sharpened, and Phrased in Advance’ 12. The Order for Reference as ‘Steadying Factor’ II: ‘A Frozen Record from Below’ 13. The Steadying Effect of Argument before the Court of Justice 14. The Steadying Effect of ‘A Known Bench’ 15. Steadying Factors in Deliberative and Decision-making Procedures 16. Conclusion Bibliography Index
Add to Wish List
eBook for individuals
978 1 78897 955 9
From £25.00
Click here for options
eBook for library purchase
978 1 78897 955 9
View sample chapter and check access on: