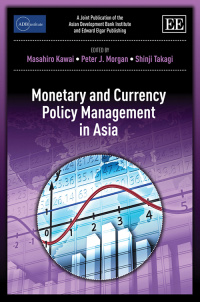 Monetary and Currency Policy Management in Asia draws lessons from crises and makes concrete macroeconomic policy recommendations aimed at minimizing the impacts of an economic and financial downturn, and setting the stage for an early return to sustainable growth. The focus is on short-term measures related to the cycle. The three main areas addressed are: monetary policy measures, both conventional and unconventional, to achieve both macroeconomic and financial stability; exchange rate policy and foreign exchange reserve management, including the potential for regional cooperation to stabilize currency movements; and ways to ease the constraints on policy resulting from the so-called ‘impossible trinity’ of fixed exchange rates, open capital accounts and independent monetary policy.

This is one of the first books since the global financial crisis to specifically and comprehensively address the implications of the crisis for monetary and currency policy in emerging market economies, especially in Asia. Presenting a broad menu of policy options for financial reform and regulation, the book will be of great interest to finance experts and policymakers in the region as well as academics and researchers of financial and Asian economics and also economic development.
Critical Acclaim
‘. . . the volume is a useful read for those interested in aspects of monetary and financial issues in Asia.’
– Ramkishen S. Rajan, The Developing Economies
Contributors
Contributors: J. Aizenman, M.D. Chinn, A. Filardo, S.-i. Fukuda, H. Genberg, H. Ito, M. Kawai, S. Kim, Y. Kon, P.J. Morgan, I. Patnaik, A. Shah, S. Takagi, D.Y. Yang, F. Zhai
Contents
Contents: