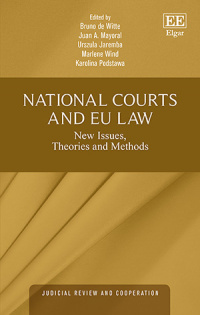 9781783479894 Edward Elgar Publishing
Judicial Review and Cooperation series
Edited by Bruno de Witte, Professor of European Union Law, Maastricht University, the Netherlands, part-time professor, European University Institute (EUI), Italy and Co-director of the Maastricht Centre for European Law, Juan A. Mayoral, iCourts – Centre of Excellence for International Courts, University of Copenhagen, Denmark, Urszula Jaremba, Europa Instituut, Utrecht University, the Netherlands, Marlene Wind, iCourts and Centre for European Politics, University of Copenhagen, Denmark and PluriCourts, University of Oslo, Norway and Karolina Podstawa, Lecturer, Department of European and International Law, University of Maastricht, the Netherlands
Publication Date: 2016 ISBN: 978 1 78347 989 4 Extent: 288 pp
National Courts and EU Law examines both how and why national courts and judges are involved in the process of legal integration within the European Union. As well as reviewing conventional thinking, the book presents new legal and empirical insights into the issue of judicial behaviour in this process. The expert contributors provide a critical analysis of the key questions, examining the role of national courts in relation to the application of various EU legal instruments.

More Information
Critical Acclaim
Contributors
Contents
More Information
This insightful and discerning book offers a fresh discourse on the functioning of national courts as decentralised EU courts and a new thematic for revising some older understandings of how national judges apply EU law.

Organised into three key sections, the interdisciplinary chapters combine approaches and theories originating from law, political science, sociology and economics. The first section addresses issues relating to judicial dialogue and EU legal mandates, the second looks at the topic of EU law in national courts and the third considers national courts’ roles in protecting fundamental rights in the area of freedom, security and justice. The analysis of each is enriched through diverse research methods such as case-law analysis, citation network analysis, interviews, surveys and statistics.

With its new legal and empirical assessment covering the newest member states of the EU, National Courts and EU Law will hold strong appeal for scholars and students in the fields of EU law, social sciences and humanities. It will also be of use to legal practitioners interested in the issue of judicial application of EU law.

Critical Acclaim
‘This new volume offers a fresh perspective on the vital role played by national courts in the implementation of EU law. Wide-ranging and multi-disciplinary in character, it sheds new light on the relationship between national courts and the ECJ and the reception of EU law by national courts. The volume will be welcomed by anyone concerned with the functioning of the EU’s legal order.’
– Anthony Arnull, University of Birmingham, UK

‘Overall, the book is a great addition to the literature on the interaction between EU and national law. It provides a further piece to this ever-changing puzzle.’
– Common Market Law Review

PART I JUDICIAL DIALOGUE AND EU LEGAL MANDATES: RECENT DEVELOPMENTS ALONG WITH THE POTENTIAL AND LIMITATION ARISING FROM ITS USE BY NATIONAL JUDGES
2. The Preliminary Ruling Dialogue: Three Types of Questions Posed by National Courts
Bruno De Witte

5. National Courts and the Effectiveness of EU Law
Urška Šadl

9. “Emulate Thy Neighbour?” How Dialogues Between the CJEU and Non-EU Courts Could be Explained Through International Relations Theory
Allan F. Tatham

PART III CONTEMPORARY DYNAMICS IN THE LEGAL INTEGRATION OF EUROPE: NATIONAL COURTS’ ROLES IN PROTECTING FUNDAMENTAL RIGHTS AND IN THE AREA OF FREEDOM, SECURITY AND JUSTICE.
10. A Predicament for Domestic Courts: Caught Between the European Arrest Warrant and Fundamental Rights
Aida Torres Pérez

11. Immigration and Criminal Law: Is There a Judge in Luxembourg?
Rosa Raffaelli

12. Whither Judicial Europeanization? The Case of the Race Equality Directive
Costanza Hermanin