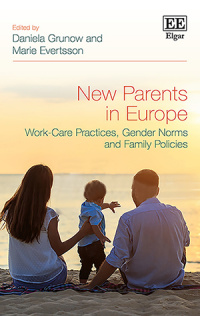 More Information
Critical Acclaim
Contributors
Contents
More Information
This innovative book explores the different ways in which dual-earner couples in contemporary welfare states plan for, realize and justify their divisions of work and care during the transition to parenthood. Providing a unique comparative, longitudinal and qualitative analysis of new parents in eight European countries, this timely book explicitly locates couples’ beliefs and negotiations in the wider context of national institutional structures.

Compelling evidence is provided, demonstrating that the ways and degrees to which new parents can realize their work-care plans and ideals systematically relate to the support structures and resources available from employers, families and the state. A key focus is on couples that act in a non-normative way compared to their national, gender cultural context.

New Parents in Europe will be of great value to sociology, political science and economics scholars alike and, with its use of cutting-edge methodology, will prove to be a valuable resource for policy makers.
Critical Acclaim
‘The book is of paramount importance for research on social inequalities.’
– Dorottya Deak, European Journal of Social Security

‘New Parents in Europe is a long-desired book for everyone who wants to understand how today's work-care practices, parenting norms, and the impact of social policies are changing the lives of new parents in Europe today. The book is a masterpiece of cross-national research with longitudinal data that is sensitive to different gender ideologies of parents in various countries, their equity patterns in the division of paid and unpaid work, the gender norms over the adult life course, and the creation and maintenance of gender identities.’
– Hans-Peter Blossfeld, University of Bamberg, Germany

‘Transition to parenthood can be imagined, but it is only following the arrival of a baby that the impact it will have dawns. It is these early years of parenthood, which are addressed in this excellent, comparative collection. Across the eight countries included, the ways in which caring and paid work are managed is explored. This includes considering non-normative care and paid work arrangements at the individual/couple level, set against national comparisons of cultural commitments to gender equality and structural features such as welfare regimes. Across the chapters, possibilities of undoing gender are glimpsed, but so too is a continued conflation at various levels, of mothers and primary caring ‘obligations’. The sensitive analysis reveals how gendered ‘choices’ and individual practices, related to caring and paid work, come to be organised. This collection makes a timely and significant contribution to the parenthood literature and is highly recommended.’
– Tina Miller, Oxford Brookes University, UK

7. Couples’ alignment of pre-birth plans and post-birth realities in Switzerland: Non-normative adaptation to the one and a half earner model
Nadia Girardin, Doris Hanappi and Jean-Marie Le Goff

PART V NEW WELFARE STATES’ RESPONSES TO DUAL EARNING AND CARING
10. ‘It is not something we consciously do’: Polish couples’ struggles to maintain gender equality after the birth of their first child
Maria Reimann

PART VI DRAWING CONCLUSIONS: A COMPARATIVE PERSPECTIVE ON NEW PARENTHOOD IN EUROPE
12. Swimming against the tide or going with the flow? Stories on work-care practices, parenting norms and the importance of policies in a changing Europe
Marie Evertsson and Daniela Grunow