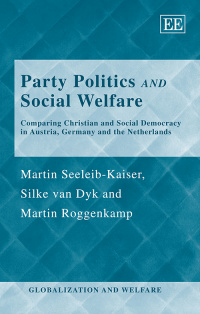 Comparing Christian and Social Democracy in Austria, Germany and the Netherlands

More Information
Critical Acclaim
Contents
More Information
Christian and Social Democratic parties have been the driving force behind welfare state developments post-WWII. This valuable book investigates whether continued party differences have contributed significantly to the design of social welfare in three conservative welfare states, Austria, Germany and the Netherlands, since the mid-1970s.

Rather than assuming continued differences or convergence between parties, the primary focus is to empirically analyze party positions with regard to employment and labour market policies, social security, and family policies as well as the implemented policies themselves. The analysis demonstrates how changed interpretative patterns have led to a programmatic convergence amongst Christian Democrats and Social Democrats, largely resulting in a liberal-communitarian approach to the development of social welfare policies.

Providing a comprehensive approach to welfare state analysis and scrutinizing the policy domains of employment, social security and family policies, this book will be of great interest to political scientists and sociologists interested in welfare state developments. It will also appeal to lecturers and postgraduate students in (comparative) social policy.
Critical Acclaim
‘This is a well-researched and very informative study of the relative impact of social democracy and Christian democracy on welfare state reform in the past three decades. . . I highly recommend it, because the book makes a great contribution to the debate on whether and how partisan politics still makes a difference for social and economic policy developments. . . The book is a must for students of the welfare state and it would provide perfect reading material for any course on the politics of welfare state reform.’
– Kees van Kersbergen, Journal of European Social Policy