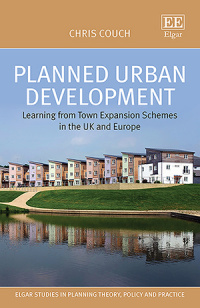 Learning from Town Expansion Schemes in the UK and Europe

More Information
Critical Acclaim
Contents
More Information
Using case studies from the UK and Europe, Chris Couch examines the nature and achievements of the expanded towns programmes that emerged in the mid-20th century to accommodate population growth and overspill from densely populated urban areas. Thought-provoking insights into lessons to be learnt are provided, alongside arguments for further planned expansion of smaller towns today.

This timely book investigates how development pressures caused by rapidly growing populations, have led to some disregard for health and housing standards, and how a fresh look at the relationship between urban form and public health is necessary, particularly in the wake of the Coronavirus pandemic. The author raises the importance of strong planning and public land acquisition, concluding with a strong case for a new programme of planned expansion in smaller towns.

Written in an accessible style, this book is an excellent resource for students and researchers in urban planning, geography and history as well as housing policy, estate management and the built environment. Practitioners and policy makers within town planning and urban development would also find this an invaluable read.

Critical Acclaim
‘Chris Couch provides a detailed overview of the modern history of urban extension schemes in Britain. Discussions of broader trends are combined with in-depth chapters on individual localities, including international comparative case studies in France and the Netherlands. The book contains rich empirical material throughout and is illustrated by original masterplan sketches, recent images and data visualizations. The lessons from Couch’s historical analysis will be valuable for planners managing urban expansion and sprawl in a variety of contemporary contexts across the world.’
– Matthew Cocks, Principia College, US

‘Planned Urban Development: Learning from Town Expansion Schemes in the UK and Europe is an important and timely contribution to planning literature. The analysis provided in this book confirms the centrality of the broad vision and applied practice of planning for balanced urban development. Through a series of national and international case studies, each of which is documented in great detail, Chris Couch provides a meticulously researched account of one of the most significant planning initiatives of the 20th century – the town expansion scheme.’
– Cathal O'Connell, University College Cork, Ireland

‘By threading different time periods of different town expansion plans, Chris Couch has written a must-read text for anyone who is interested in learning from how planning policies and decisions since the 1950s have impacted on housing supply and shaped our everyday life in the UK and Europe. It is a very well-researched book and serves as a mirror to remind us what to do and what not to do in our planned urban development.’
– Cecilia Wong, University of Manchester, UK
Contents
Contents: Preface 1. Introduction to Planned Urban Development 2. The origins and evolution of expanded towns policy 3. The geography and planning of town expansion 4. Big beasts: pioneering developments in Bletchley and Swindon 5. Other expanded towns serving London 6. Planning for overspill in North-West England 7. Using the New Towns Acts for larger town expansion schemes 8. Comparative experiences from the Netherlands and France 9. Overall achievements and future possibilities 10. Conclusion: learning from town expansion schemes in the
UK and Europe Bibliography Index
Add to Wish List
eBook for individuals
978 1 78897 691 6
From £25.00
Click here for options
eBook for library purchase
978 1 78897 691 6
View sample chapter and check access on:

A Research Agenda for Urban Tourism