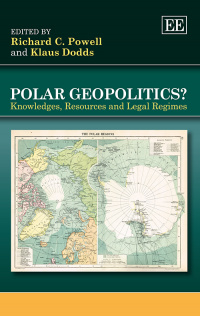 9781781009406 Edward Elgar Publishing
Edited by Richard C. Powell, Department of Geography, University of Cambridge and Klaus Dodds, Professor of Geopolitics, Royal Holloway, University of London, UK
Publication Date: 2014 ISBN: 978 1 78100 940 6 Extent: 336 pp
The polar regions (the Arctic and Antarctic) have enjoyed widespread public attention in recent years, as issues of conservation, sustainability, resource speculation and geopolitical manoeuvring have all garnered considerable international media interest. This critical collection of new and original papers – the first of its kind – offers a comprehensive exploration of these and other topics, consolidating the emergent field of polar geopolitics.

More Information
Critical Acclaim
Contributors
Contents
More Information
The polar regions (the Arctic and Antarctic) have enjoyed widespread public attention in recent years, as issues of conservation, sustainability, resource speculation and geopolitical manoeuvring have all garnered considerable international media interest. This critical collection of new and original papers – the first of its kind – offers a comprehensive exploration of these and other topics, consolidating the emergent field of polar geopolitics.

The expert international contributors to this volume offer a range of insightful comparative, interdisciplinary and global perspectives on polar issues. Key topics discussed include resource extraction, regime formation, knowledge construction, border issues, governance and treaties, and indigenous livelihoods. Contributions from scholars of history, geography, political science, anthropology and international law make this a truly comprehensive take on the current state and future prospects of both the polar regions and polar geopolitics as a distinct discipline.

Students and professors of geopolitics, political science and geography – especially those with an interest in the polar regions – will find much of value in this book’s concrete expression of a new and fascinating field.
Critical Acclaim
‘There is a renewed interest on the polar oceans in general and, in
particular, the Arctic as a political and economic space that is
‘opening up’ because of the reported thawing of sea ice. This is
making the Arctic more accessible to various economic, political
and scientific activities; yet the Arctic is not covered by a comprehensive regional treaty-based legal regime. This is certainly the right moment for books such as Polar Geopolitics? to appear. The recent geopolitical literature on polar affairs in general and the Arctic in particular includes notable contributions to these corners of the world, but is also characterised by overly speculative and opinionated accounts that are valuable mostly as research materials for interrogations on polar geopolitics. The edited collection by Powell and Dodds, both recognised experts in this area of research, clearly belongs to the better part of this emerging literature. The book is exceptional in that it attempts to focus on both polar regions within one volume but also problematises this endeavour, asking whether it is analytically tenable to write about a polar geopolitics at all’
– Sami Moisio, Area Royal Geographical Society


‘This is a strong, balanced and provocative collection that is truly more than the sum of its parts, thanks to well-informed editorial hands. I am sure that this volume will become a standard reference in future discussions of polar geopolitics, for many years to come. This is a very valuable book.’
– Frances D. Abele, Carleton University, Canada

2. The Polar Regions and the Law of the Sea
Donald R. Rothwell

3. Defining and Recognizing the Outer Limits of the Continental Shelf in the Polar Regions
Harald Brekke

PART II: NATIONAL VISIONS
6. ‘We Have Proved It, the Arctic is Ours’
Andrew Foxall