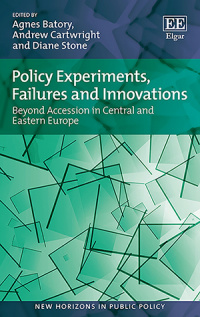 Beyond Accession in Central and Eastern Europe

Contributions consider the extent to which external models have had real traction in the political economies and societies of the CEE countries. The book also considers the ways external models were adapted, transformed or sometimes abandoned in response to unexpected difficulties in implementation. It provides critical analysis of the setbacks, real or perceived policy failures, as well as innovations and unexpected outcomes in a number of important policy areas in the ‘new’ member states of the EU.

This book will be of interest to policy studies scholars and European Union/European studies scholars. It is also relevant for students of European politics as well as general public policy degree courses at undergraduate and graduate level.
Critical Acclaim
‘The volume is richly informative and impressive in its reach across a wide range of policy fields, and it will inspire any further work on this topic.’
– Mihai Varga, Journal of Common Market Studies

‘Policy Experiments, Failures and Innovation breaks new ground for the understanding of policy diffusion, transfer and change in the face of Europeanisation and globalisation. The volume presents a welcome analysis of policy developments in Central and Eastern Europe since European Union accession, while tracing many reforms in a wide range of policy areas to the pre-accession period. The chapters provide fascinating accounts of experimentation, re-interpretation, indigenisation, hybridisation and policy learning in Central and Eastern Europe a quarter of a century after the end of communism and more than a decade since accession to the European Union. Combining theoretical ambition and empirical depth, this volume is essential reading for scholars, students and practitioners with an interest in public policy in Europe and beyond.’
– Jan Meyer-Sahling, University of Nottingham, UK

‘At last a book that makes sense of processes of policy diffusion and transfer in Central and Eastern European countries as they adapt to Europeanisation. Batory, Cartwright and Stone have written an invaluable contribution to our understanding of the complexities of European integration at the institutional level. Theoretically informed and empirically driven this is mandatory reading for public policy academics and analysts alike.’
– Mark Evans, University of Canberra, Australia

‘Bringing Central and Eastern Europe (CEE) into the EU meant transferring the EU – its laws, norms and institutions – into the CEE. Was it successful? This outstanding collection reveals a tortured tango of EU transfer and CEE response, in which a choreography of compliance is often contested, resisted or adapted to local needs and conditions. Innovative in theory, and rich in detail, the chapters provide a fresh and timely assessment of the Europeanization project, and its differing fortunes across the region.’
– Leslie A. Pal, Carleton University, Canada
Contributors
Contributors: D. Adascalitei, A. Batory, A. Cartwright, D. Craciun, S. Domonkos, H. Grabbe, A. Kemmerling, A. Krizsan, K. Makszin, L. Matei, G. Medve-Bálint, B.G. Peters, D. Stone, S. Svensson, A. Tétényi, S. Torotcoi, V. Zentai

10. Reforming through Borrowing and Learning: Easy, but so Terribly Difficult
B. Guy Peters