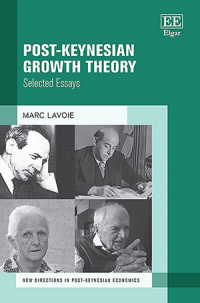 More Information
Critical Acclaim
Contents
More Information
Post-Keynesian Growth Theory is the second volume of Marc Lavoie's Selected Essays, and is a collection of 18 articles published between 1995 and 2020, on themes touching growth and distribution. The book contains an extended foreword by Eckhard Hein, and an introduction by Lavoie that recalls how he became attracted to post-Keynesian growth theory more than 45 years ago, and explains how and why this book came about.

The collection includes a number of papers showing Lavoie's evolving approach to neo-Kaleckian models of growth and distribution, incorporating hysteresis, overhead labour, monetary issues, price inflation, as well as various sources of autonomous non-capacity creating expenditures. It shows how all of these interact with alternative Marxian or Sraffian approaches as well.

A section of the book is also devoted to two-sector models, in particular the issue of the traverse from one equilibrium to another, extending the Kaleckian model but also providing insights into the works of Hicks and Pasinetti.

Both professors and graduate students will benefit from the decades of experience and wisdom amassed and presented in Post-Keynesian Growth Theory.

‘Even before now it could easily have been said of Marc Lavoie that he had “written the book” on Post-Keynesian growth theory. And now he really has. This collection of essays displays remarkable breadth, rigour, and coherence, and is a must-read for any serious scholar in the field.’
– Mark Setterfield, New School For Social Research, US
Contents
Contents: