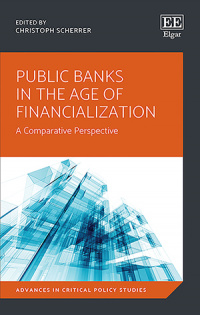 Public Banks in the Age of Financialization

9781786430656 Edward Elgar Publishing
Advances in Critical Policy Studies series
Edited by Christoph Scherrer, Professor of Globalization and Politics, Department of Social Sciences, University of Kassel, Germany
Publication Date: 2017 ISBN: 978 1 78643 065 6 Extent: 288 pp
This book asks the important question of whether public banks are a better alternative to profit-seeking private banks. Do public banks provide finance for development? Do they serve as stability anchors in financial markets? What kind of governance keeps public banks accountable to the public? Theoretically the book draws on the works of Minsky for the question on stability and on interpretative policy analysis for the issue of governance. It compares empirically three countries with significant public banks: Brazil, Germany, and India.

More Information
Critical Acclaim
Contributors
Contents
More Information
Are public banks a better alternative to private banks? Do they provide sufficient finance for development? Do they serve as stability anchors in financial markets? This is an invaluable comparison of public banks from countries at different economic development levels. The contributors highlight both the benefits of public banks and their governance failures, overcoming the sterile debate of private versus public.

Empirically analyzing three countries with significant public banks - Brazil, Germany and India – contributors support the Keynesian argument that public banks can contribute to employment by stabilizing the business cycle and by providing finance on a long-term basis. Taking cues from critical interpretative policy analysis, it is argued that neither changes in the incentive structure of management, nor institutional fora for public deliberations will prevent irresponsible behavior. Management’s perception of the mission of public banks has to change, as well as its understanding of their role in society.

Public Banks in the Age of Financialization will give insight to advanced students of finance, comparative politics and public management. Policy experts and public bank managers will also benefit from the in-depth case studies that provoke discussion on both the positives and negatives of public banks.

Critical Acclaim
‘A powerful and persuasive case for the continuing importance of public banks. Economists and policymakers cannot afford to ignore this comprehensive, insightful and careful discussion of the experience of public banking in both developed and developing countries.’
– Jayati Ghosh, Jawaharlal Nehru University, India

‘Wonderful and timely contribution. The turmoil in the global economy in the aftermath of the 2007 crisis underscored the need for financial institutions able to promote stable, sustainable and inclusive growth. This book highlights the potential unique contribution of public banks to that end. Rich and nuanced empirical work from Brazil, India and Germany is offered to support the argument. The authors go beyond ideological controversies to reveal with impeccable scholarship the important role of public banks as anchors of economic stability and development. The crucial need of governance mechanisms that guarantee accountability to the public also emerges from the reading.’
– Mariano Laplane, Centre for Strategic Studies and Management, Brazil

‘The global financial crisis has shown the fragility of private banks. The question is whether public banks are the panacea contributing to a more sustainable financial system. The editors gathered many of the best analysts to critically examine this proposition. For this purpose, they use new interpretative theoretical insights to interrogate case studies from Brazil, Germany, and India to understand the role of public banks at different development stages. In a persuasive manner, the authors demonstrate the benefits of public banks, but at the same time point out that public banks are not immune to governance failures. Focusing on irresponsible management behavior is a much needed, and more nuanced, intervention in the sterile debate of private versus public banks.’
– Brigitte Young, University of Muenster, Germany
Contributors
Contributors: O. Butzbach, P. Chavan, S. Deos, M. Dieterle, K. Mettenheim, A. Nunes Ferreira, X. Polikhronidi, M. Rajeev, A.R. Ribeiro de Mendonça, C. Ruocco, C. Scherrer, D. Seikel, H. Semenyshyn, B.H. Sibin, E. Sotto Tibiriçá Rosa, T. Tagieva

2. Back to the Future of Alternative Banks and Patient Capital
Kurt von Mettenheim and Olivier Butzbach

7. Public Banks and Financial Intermediation in India: The Phases of Nationalisation, Liberalisation and Inclusion
Pallavi Chavan

14. The Challenge of Keeping Public Banks on Mission
Christoph Scherrer