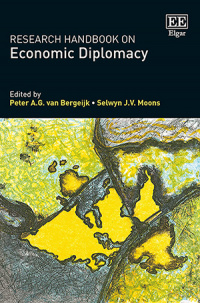 Bilateral Relations in a Context of Geopolitical Change

More Information
Critical Acclaim
Contributors
Contents
More Information
Bilateral economic diplomacy is an increasingly popular method of ensuring both commercial and broader economic interests. In this Handbook over 30 leading experts from developed and developing countries, industrial nations and emerging economies have come together to form a global view of economic diplomacy.

Representing a move away from Euro-centric books on the topic, this Handbook uses a combination of qualitative and quantitative research to explore how state visits, embassies and economic sanctions are being increasingly used as forms of diplomacy. Editors Peter van Bergeijk and Selwyn Moons have ensured that the entire research process is covered, from data collection to evidence based policy advice. As such, the Handbook reveals how and under which conditions economic diplomacy can be most effective, proving an invaluable tool for future research.

The Research Handbook on Economic Diplomacy is a key resource for academics and researchers at policy institutions who wish to understand the field in greater depth. Policy makers and other actors at domestic and international levels would also greatly benefit from this extensive international view of economy diplomacy.

2. (Economic) diplomacy: in need of a new paradigm?
Gorazd Justinek

5. The use of case studies in economic diplomacy research
Renata Cavalcanti Muniz

7. The anatomy and the impact of export promotion agencies
Marcio Cruz, Daniel Lederman and Laura Zoratto

12. Passing export hurdles with a little help from my friends
Arjan Lejour