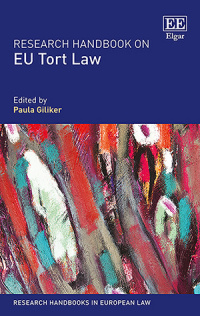 9781785365713 Edward Elgar Publishing
Research Handbooks in European Law series
Edited by Paula Giliker, Professor of Comparative Law, University of Bristol, UK
Publication Date: 2017 ISBN: 978 1 78536 571 3 Extent: 512 pp
The Research Handbook on EU Tort Law focuses on the study of the law of tort/delict/non-contractual liability of the European Union and examines the institutional liability of the EU, Francovich liability, and liability arising from a variety of EU secondary legislation (directives/regulations). The impact of EU tort law on national legal systems is wide-ranging, covering areas such as consumer law, competition law, data protection law, employment law, insurance law and financial services law. It also discusses the potential development of a European culture of tort law and harmonisation. This comprehensive Research Handbook contains contributions from leading authors in their field, representing a cross-section of European jurisdictions. It offers an authoritative reference point for academics, students and practitioners studying or working in this field, but one which is also accessible for those approaching the subject for the first time.

More Information
Critical Acclaim
Contributors
Contents
More Information
The Research Handbook on EU Tort Law critically examines tort liability arising from EU law. It brings together for the first time different elements of EU tort law to provide a comprehensive overview of the institutional liability of the EU, member state liability and liability arising from a variety of EU legislation. Contributors are experts in their field and range from the UK and Ireland to France, Germany, the Netherlands and Hungary.

The impact of EU tort law on national legal systems is wide-ranging. It extends to areas as diverse as consumer law, competition law, data protection law, employment law, insurance law and financial services law. The Research Handbook provides a detailed analysis of these areas of law and considers the extent to which we can now identify an emerging European culture of tort law. It further analyses the impact of proposals to harmonise European tort law and considers the impact of Brexit on EU tort law.

1. What do we mean by ‘EU tort law’?
Paula Giliker

2. The non-contractual liability of the European Union: Principle, practice and promise
Kathleen Gutman

4. Francovich liability before national courts: 25 years on, has anything changed?
Marie-Pierre F. Granger

5. Directive 85/374/EEC concerning liability for defective products: In the name of harmonisation, the internal market and consumer protection
Fidelma White

9. A compulsory diet of chickens and eggs: The EU Motor insurance directives as a shadow tort regime
James Davey

15. The tort provisions of the Study Group on a European Civil Code and their uses
John Blackie

16. The harmonisation of EU tort law: A law and economics analysis
Michael Faure