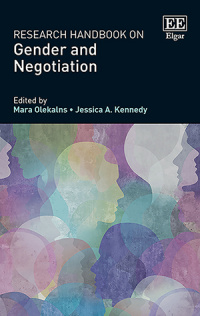 Research Handbook on Gender and Negotiation

The Research Handbook offers helpful insights to negotiators and forges a path for future research. The Handbook initially highlights how gender shapes negotiation within close relationships and identifies informal social rules for how women and men are expected to negotiate, exploring the socialization patterns and historical contexts that produced these norms and the implications for women at the bargaining table. The contributors then discuss how underlying negotiation processes such as trust, emotion, communication and non-verbal behaviour are shaped by gender, as well as considering a number of pragmatic solutions to the obstacles women face as self-advocates.

Offering insights for both practitioners and researchers, this Research Handbook will be invaluable to teachers and, also, female professionals who want to understand how to get better outcomes from negotiation. It will also be required reading for HR professionals who wish to understand how and why organizational policies regarding negotiation can level the playing field.

Critical Acclaim
‘This book makes a fabulous contribution to our understanding of the role of gender in negotiations, highlighting the contextual and situational forces that influence the negotiation process. A wonderful exploration of the burgeoning research in this field and a call to action for future inquiry.’
– Linda C. Babcock, Carnegie Mellon University, US

'This Research Handbook gathers research by top scholars across disciplines to provide a depth of insight that is unparalleled, shedding much needed light on the complex role of gender in personal and professional negotiations. By concurrently focusing on the social context, interpersonal dynamics, and individual characteristics of negotiators, the Research Handbook provides an agenda for future research and suggestions for what people and institutions can do to level the playing field. It will be the go-to resource for years to come.'
– Laurie R. Weingart, Carnegie Mellon University, US

11. Anger and Anxiety in Masculine-Stereotypic and Male-Dominated (MSMD) Negotiating Contexts: Affect and the Study of Gender in Negotiation
Chiara Trombini, Logan A. Berg, and Hannah Riley Bowles

17. What Does ‘Bouncing Back’ Mean? Defining the Role of Resilience in Gender and Negotiations
Brooke A. Gazdag

Conclusion
18. Shifting Directions in Gender and Negotiation: From Understanding Women toward Understanding their Counterparts
Jessica A. Kennedy and Mara Olekalns

Handbook of Research on Creativity and Innovation

A Research Agenda for Workplace Stress and Wellbeing

Handbook of Research Methods on Gender and Management