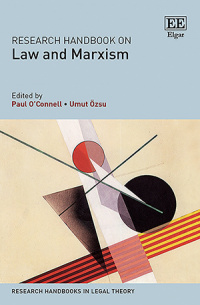 More Information
Critical Acclaim
Contributors
Contents
More Information
This Research Handbook offers unparalleled insights into the large-scale resurgence of interest in Marx and Marxism in recent years, with contributions devoted specifically to Marxist critiques of law, rights, and the state.

The Research Handbook brings together thirty-three scholars of Marx, Marxism, and law from around the world to offer theoretically informed introductions to the Marxist tradition of social critique, contemporary Marxist analyses of law and rights, and future orientations of Marxist legal analysis. Chapters testify to the strength of Marxist critical tools for understanding the role of law, rights, and the state in capitalist societies.

Exploring Marxist critique across an extraordinarily wide range of scholarly disciplines, this Research Handbook is a must-read for scholars of law, politics, sociology, philosophy, and political economy who are interested in Marxism. Graduate and advanced undergraduate students in these and related disciplines will also benefit from the Research Handbook.

Critical Acclaim
‘The modestly titled Research Handbook on Law and Marxism is in fact a pioneering venture that brings together as many as 29 contributions on a wide range of subjects relating to law, seen through the analytical prism of Marxism. It will prove to be a useful reference point for students and seasoned writers alike.’
– Utsa Patnaik, Professor Emerita, Jawaharlal Nehru University, India

‘This volume displays the breadth and vitality of research on law from within the traditions of Marxism. Written from many different perspectives and by a healthy mix of eminent and emerging scholars, the essays collected here ably guide the reader through a century and a half of debates and controversies. These are debates both among Marxists about the status, import, and structure of the law and modern legal institutions, and between Marxists and non-Marxist legal scholars, collectively demonstrating that Marxism has indelibly shaped legal theory, constitutional theory, the theory of the state, and the theory of international law. This will undoubtedly be my new go-to reference volume on all questions pertaining to Marxism and legal studies.’
– William Clare Roberts, McGill University, Canada

‘Paul O’Connell and Umut Özsu have done a great service to all scholars of Marxism. They have assembled a comprehensive volume that includes contributions of both noted experts and brilliant young researchers and that fills a void in the existing literature. The outcome is a wonderful Handbook that is useful for both specialists and readers who approach Marxism and law for the first time. This book will serve as a guide in the field for many years to come.’
– Marcello Musto, York University, Canada

Research Handbook on Law and Diplomacy