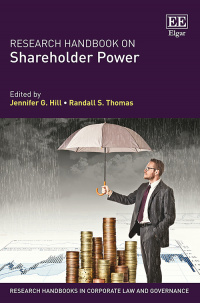 9781782546849 Edward Elgar Publishing
Research Handbooks in Corporate Law and Governance series
Edited by Jennifer G. Hill, Bob Baxt AO Chair in Corporate and Commercial Law, Director, Centre for Commercial Law & Regulatory Studies (CLARS), Faculty of Law Monash University, Australia and Randall S. Thomas, John S. Beasley II Professor of Law and Business, Vanderbilt University Law School, US
Publication Date: 2015 ISBN: 978 1 78254 684 9 Extent: 640 pp
Much of the history of corporate law has concerned itself not with shareholder power, but rather with its absence. Yet, as this Handbook shows, there have been major shifts in capital market structure that require a reassessment of the role and power of shareholders. This book provides a contemporary analysis of shareholder power and considers the regulatory consequences of changing ownership patterns around the world. Leading international scholars in corporate law, governance and financial economics address these central issues from a range of different perspectives including historical, contemporary, legal, economic, political and comparative.

More Information
Critical Acclaim
Contributors
Contents
More Information
Much of the history of corporate law has concerned itself not with shareholder power, but rather with its absence. Recent shifts in capital market structure require a reassessment of the role and power of shareholders. These original, specially commissioned contributions by leading scholars in corporate law and financial economics provide a contemporary analysis of shareholder power and consider the regulatory consequences of changing ownership patterns around the world.

Students and scholars of corporate law will value the Handbook’s timely exploration of modern shareholder power as well as its fresh perspective and scope.

Critical Acclaim
‘The most pressing challenge in corporate governance today is figuring out how to modulate the power given to public investors. Too little is harmful, but so is too much. Finding the sweet spot is very tricky. This Research Handbook makes the quest a little easier. It collects in one place a set of thoughtful and provocative essays, authored by leading academic experts from around the world, on a range of topics related to corporate governance and the power of shareholders. Very highly recommended.’
– Jesse Fried, Harvard Law School, US

‘The Research Handbook on Shareholder Power offers a state-of-the-art collection of original essays on the most profound development in corporate governance in recent decades: the growth of shareholder power as against managerial dominance. From the 1960s through at least the mid-1980s one would hear only cries bemoaning shareholder vulnerability. Managers were in control. Today it is at least as common to hear complaints by managers that they are being persecuted by activist shareholders. The reader of the Handbook will come away with an acute understanding of how and why this happened, and how all this reverberates in countries.’
– Donald C. Langevoort, Georgetown University, US

‘Edward Elgar’s Research Handbook on Shareholder Power is an excellent collection of essays by leading scholars in the fields of corporate law and corporate governance. Professors Hill and Thomas are to be commended for delivering this valuable and timely volume on a fascinating and crucial topic.’
– Brian Cheffins, University of Cambridge, UK

PART I SHAREHOLDER POWER – THEN AND NOW

D. The State As Controlling Shareholder

9. Shareholder Rights In China: From Book to Action
Li Guo and Gilbert Heng

PART III OWNERSHIP AND GOVERNANCE: THE EVOLVING RELATIONSHIP BETWEEN SHAREHOLDERS AND THE BOARD OF DIRECTORS
10. Conceiving Corporate Commitment: Creation and Confirmation
Colin Mayer

13. Independent Directors and Controlling Shareholders Around The World
Guido Ferrarini and Marilena Filippelli

16. Whose Law Is It?: Battling Over Turf in Shareholder Litigation
James D. Cox

18. Institutional Investor Activism in a Context of Concentrated Ownership and High Private Benefits of Control: The Case of Italy
Massimo Belcredi and Luca Enriques

B. USA and South America

20. The Power of Shareholders in the United States
Robert B. Thompson

21. The Theory and Practice of Corporate Voting at US Public Companies
Randall S. Thomas and Paul H. Edelman

22. Corporate Control and Governance After a Decade From “Novo Mercado”: Changes in Ownership Structures and Shareholder Power in Brazil
Érica Gorga