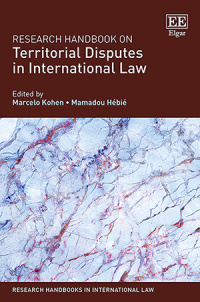 Combining extensive knowledge from across international law, Marcelo Kohen and Mamadou Hébié expertly unite a multinational group of contributors to provide a go-to resource for the settlement of territorial disputes. The different chapters discuss the process through which states establish sovereignty over a territory, and review the different titles of territorial sovereignty, the relation between titles and effectivités, as well as the relevance of state conduct. Select chapters focus on the impact of foundational principles of international law such as the principle of territorial integrity, the right of self-determination and the prohibition of the threat or use of force on territorial disputes. Finally, technical rules that are crucial for the assessment of territorial claims, especially the techniques of intertemporal law and critical date, as well as evidentiary rules, are presented.

An essential resource for practitioners, international law academics and public officials including judges and arbitrators, this Research Handbook is a highly original collection of scholarship and research on territorial disputes and their settlement.
Critical Acclaim
‘The Research Handbook on Territorial Disputes in International Law certainly has conquered its place among the fundamental literature on the law of territory.’
– Michael J Moffatt, Austrian Review of International and European Law

‘Territorial disputes, which were to be found at the origins of international law, are still present in a number of current international affairs. State sovereignty, the delimitation of territories according to all pertinent circumstances, the authority of legal titles, as well as the respect, not only of the consent of the interested States, but also of the right of peoples and human rights count among the fundamental principles governing the matter, which still remains at the core of modern international law. All the applicable rules in the field are studied and systematically analysed in this remarkable and comprehensive book in which the plurality of authors does not impair the profound consistency between the chapters.’
– Pierre-Marie Dupuy, Professor of International Law, Graduate Institute, Switzerland and International Arbitrator
Contributors
Contributors: M.J. Aznar, T. Christakis, A. Constantinides, K. Del Mar, G. Distefano, M. Hébié, P. Klein, M.G. Kohen, V. Koutroulis, S. Lee, G. Nesi, K. Parlett

Part I The establishment of title of sovereignty over a territory
2. The acquisition of original titles of territorial sovereignty in the law and practice of European colonial expansion
Mamadou Hébié

3. The acquisition of derivative titles of territorial sovereignty in the law and practice of European colonial expansion
Mamadou Hébié

Part II The impact of fundamental principles of international law
7. Territorial disputes and the use of force
Pierre Klein and Vaios Koutroulis

10. Territorial disputes in the context of secessionist conflicts
Theodore Christakis and Aristoteles Constantinides