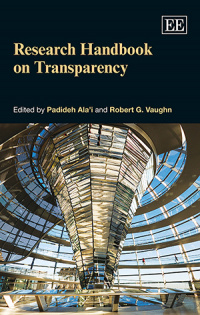 9781781007938 Edward Elgar Publishing
Edited by Padideh Ala’i, Professor of Law and Robert G. Vaughn, Professor of Law and A. Allen King Scholar Emeritus, American University, Washington College of Law, US
Publication Date: 2014 ISBN: 978 1 78100 793 8 Extent: 432 pp
In the last two decades transparency has become a ubiquitous and stubbornly ambiguous term. Typically understood to promote rule of law, democratic participation, anti-corruption initiatives, human rights, and economic efficiency, transparency can also legitimate bureaucratic power, advance undemocratic forms of governance, and aid in global centralization of power. This path-breaking volume, comprising original contributions on a range of countries and environments, exposes the many faces of transparency by allowing readers to see the uncertainties, inconsistencies and surprises contained within the current conceptions and applications of the term.

The expert contributors identify the goals, purposes and ramifications of transparency while presenting both its advantages and shortcomings. Through this framework, they explore transparency from a number of international and comparative perspectives. Some chapters emphasize cultural and national aspects of the issue, with country-specific examples from China, Mexico, the US and the UK, while others focus on transparency within global organizations such as the World Bank and the WTO. A number of relevant legal considerations are also discussed, including freedom of information laws, financial disclosure of public officials and whistleblower protection.

A diverse and unique volume, the Research Handbook on Transparency will prove an essential reference for scholars, policy makers, practitioners and legal reform advocates.

‘For me this book could have been titled Everything I Ever Wanted To Know About Transparency Policy And Law — But Didn’t Know Enough To Ask. It is masterful and unmatched in depth, scope, and acuity. It convincingly analyzes the complexities of transparency on a comparative basis in terms of goals, culture and government, legal approaches, and global governance. What is transparency? What can it be? What are its consequences? How can it be promoted and regulated? Henceforth no one should seriously attempt to address such questions without first reading this outstanding book.’
– David H. Rosenbloom, School of Public Affairs, American University, US

2. The Relationship between Transparency, Whistleblowing and Public Trust
A. J. Brown, Wim Vandekerckhove and Suelette Dreyfus

9. The Role of the Courts in China’s Progress Toward Transparency
Liu Wenjing

11. The Long and Winding Road to Transparency in the UK
Shonali Routray

15. The Emerging Norm of Transparency in International Environmental Governance
David B. Hunter

16. Transparency in International Economic Relations and the Role of the WTO
Padideh Ala'i & Matthew D'Orsi