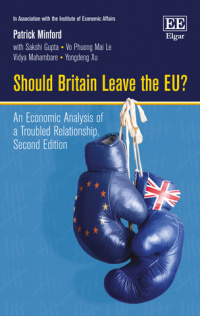 9781785360329 Edward Elgar Publishing
Patrick Minford, Professor of Applied Economics, Cardiff Business School, Cardiff University, UK with Sakshi Gupta, Economist, CRISIL, India, Vo Phuong Mai Le, Lecturer, Cardiff Business School, Cardiff University, UK, Vidya Mahambare, Associate Professor of Economics, Great Lakes Institute of Management, Chennai, India, Yongdeng Xu, Researcher, Cardiff Business School, Cardiff University, UK
Publication Date: 2015 ISBN: 978 1 78536 032 9 Extent: 200 pp
This second edition brings up to date a thorough review of all economic aspects of the UK's relationship with the EU, which also puts it in the political context of the upcoming referendum. It notes the intention of the EU to move to 'ever closer union' and the nature of the regulatory and general economic philosophy of the dominant countries of the EU whose writ is enforced by qualified majority voting. The book highlights the UK dilemma that, while extending free markets to its local region is attractive, this philosophy and intended union are substantially at odds with the UK's traditions of free markets and freedom under the common law.

More Information
Critical Acclaim
Contents
More Information
Placed in the context of the upcoming referendum, this second edition brings up to date a thorough review of all economic aspects of the UK's membership of the EU. It notes the intention of the EU to move to 'ever closer union' and the nature of the regulatory and general economic philosophy of its dominant members, whose position is enforced by qualified majority voting. The book highlights the UK’s dilemma that, while extending free markets to its local region is attractive, this European philosophy and closer union are substantially at odds with the UK's traditions of free markets and freedom under the common law.

This comprehensive examination of the economic costs and benefits of membership uses state-of-the-art modeling methods and includes estimates of its net costs as a percentage of GDP. The book explains how the decision to leave would follow from a judgement on the political economy of the EU as compared with that of the UK. It details the misconceptions involved in much of the debate about trade with the EU, and argues that the key issue is not access to markets but rather the prices at which trade takes place. Covered in careful detail is the economics of the UK’s trade with the EU in the key sectors of agriculture, manufacturing, and services.

Critical Acclaim
‘The policy framework advocated by Minford et al. . . is grounded in economic theory and an incisive empirical analysis of the costs of UK’s membership of the EU. Their thesis that the EU is a political union practising economic protectionism in the guise of gradualism towards free trade makes sense. . . Minford and his associates’ analysis suggests that the EU’s policy framework of free trade for members but restrictions on trade of non-members with the EU countries is a second best policy adopted to promote political rather than economic objectives.’
– V.N. Balasubramanyam, Lancaster University, UK


Contents
Contents: PART I UK COSTS AND BENEFITS OF EU MEMBERSHIP 1. Introduction, The UK’s Relationship to the EU, The Aim of this Book and Policy Conclusions 2. The Costs of EU Regulation 3. The Cost of the Euro 4. The Cost of EU Trade Policies for the UK PART II RECENT TRADE DEVELOPMENTS- FACTS AND ANALYSIS 5. Agriculture 6. Manufactures 7. Services Bibliography Index