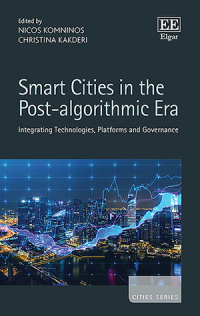 Smart Cities in the Post-algorithmic Era

9781789907049 Edward Elgar Publishing
Cities series
Edited by Nicos Komninos, Director, URENIO Research and Christina Kakderi, Department of Spatial Planning and Development, Aristotle University of Thessaloniki, Greece
Publication Date: 2019 ISBN: 978 1 78990 704 9 Extent: 328 pp
Examining the changing nature of cities in the face of smart technology, this book studies key new challenges and capabilities defined by the Internet of Things, data science, blockchain and artificial intelligence. It argues that using algorithmic logic alone for automation and optimisation in modern smart cities is not sufficient, and analyses the importance of integrating this with strong participatory governance and digital platforms for community action.

More Information
Critical Acclaim
Contributors
Contents
More Information
Examining the changing nature of cities in the face of smart technology, this book studies key new challenges and capabilities defined by the Internet of Things, data science, blockchain and artificial intelligence. It argues that using algorithmic logic alone for automation and optimisation in modern smart cities is not sufficient, and analyses the importance of integrating this with strong participatory governance and digital platforms for community action.

Separated into three parts, the book moves from looking at the academic establishment of the smart city paradigm as an advanced system of innovation, to focusing on major technologies and the governance of smart cities. Chapters explore other sources of intelligence available in cities within both institutions and platforms, including human intelligence, innovation, and collective intelligence, with insights on how to combine algorithmic logic in these areas of competence to become much more effective.

Offering a crucial understanding of how cities and regions can adopt the smart city paradigm, this book will be a useful read for policy-makers and stakeholders involved in the design and implementation of smart city strategies. Urban studies and planning scholars, post graduate students, as well as those researching the built environment, will benefit from the blend of theoretical and practical knowledge offered in the book.

Critical Acclaim
‘This book provides a very broad perspective on the evolution of the smart city movement in Europe and the UK, and includes chapters that deal with many of the most important dimensions of smart city design and technology integration. It is a useful technical reference for practitioners, technologists, city or agency officials, or teachers who want to broaden their understanding of the range of issues that are involved in smart city development.’
– W Michael Dunaway, Journal of Urban Affairs

‘This edited volume presents a rather fresh, challenging and even provocative perspectives for smart cities.’
– Aharon Kellerman, Geography Research Forum

‘Smart Cities in the Post-algorithmic Era: Integrating Technologies, Platforms and Governance is a seminal original contribution to the emerging field of smart cities. The book sets out to highlight the pervasive importance of smart technologies, platforms and governance in the urban context. It frames this new challenging field, and offers a wealth of informed conceptual and practical studies. For academics, students, and practitioners, this book offers many novel and useful insights.’
– Tan Yigitcanlar, Queensland University of Technology, Australia

‘The 21st Century is said to be the Century of Cities. Echoing this sentiment, Smart Cities in the Post-algorithmic Era argues they emerge from collaboration technologies, data science and AI and the algorithmic logic, under which these technologies operate, can be much more effective if such platforms combine with other sources of intelligence available in cities, such as human intelligence, creativity and innovation, collective and collaborative intelligence already embedded in institutions. The constructive alignment and augmentation of these technologies with human, collective and collaborative intelligence and sharing of the knowledge such a synthesis produces, is the object of this latest book from Komninos and Kakderi.’
– Mark Deakin, Edinburgh Napier University, UK

PART II SMART CITIES AT THE CROSSROADS OF IOT,
SOCIAL MEDIA AND DATA SCIENCE
6 Cloud, network and sensing in a smart city: toward a cloud of
meshed cooperative heterogeneous things 129
Valeria Loscri, Nathalie Mitton and Riccardo Petrolo
7 City dynamics tracking based on citizens’ data and sensing
analytics 150
Athena Vakali and Vaia Moustaka
8 Moving from e-Gov to we-Gov and beyond: a blockchain
framework for the digital transformation of cities 176
Ioannis Tsampoulatidis, Dimitrios Bechtsis and
Ioannis Kompatsiaris
9 A world of data: Underworlds and health challenges in the age
of smart cities 201
Snoweria Zhang, Fábio Duarte and Carlo Ratti