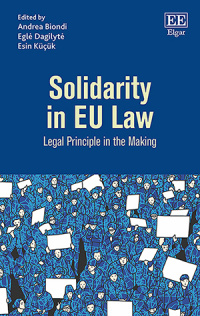 Legal Principle in the Making

9781783477777 Edward Elgar Publishing
Edited by Andrea Biondi, Professor of EU Law and Director, Centre of European Law, King’s College London and Academic Associate, 39 Essex Chambers, Eglė Dagilytė, Anglia Law School, Anglia Ruskin University and Esin Küçük, Lancaster University Law School, Lancaster University, UK
Publication Date: 2018 ISBN: 978 1 78347 777 7 Extent: 232 pp
The European Union has evolved from a purely economic organisation to a multi-faceted entity with political, social and human rights dimensions. This has created an environment in which the concept of solidarity is gaining a more substantial role in shaping the EU legal order. This book provides both a retrospective assessment and an outlook on the future possibilities of solidarity’s practical and theoretical meaning and legal enforcement in the ever-changing Union.

More Information
Critical Acclaim
Contributors
Contents
More Information
The European Union has evolved from a purely economic organisation to a multi-faceted entity with political, social and human rights dimensions. This has created an environment in which the concept of solidarity is gaining a more substantial role in shaping the EU legal order. This book provides both a retrospective assessment and an outlook on the future possibilities of solidarity’s practical and theoretical meaning and legal enforcement in the ever-changing Union.

Solidarity in EU Law examines the less explored topics of the European solidarity debate, such as the practical enforceability of solidaristic obligations in EU law and non-EU investment into the economic services of general interest via ‘golden shares’, at the same time contributing to the ongoing debates on solidarity in the context of European financial crisis and immigration, asylum and border checks. The expert editors bring these fields together to create a cohesive analysis of the ways in which solidarity is becoming a principle of EU constitutional law rather than merely a philosophical or political concept.

Unique and insightful, this book is ideal reading for European law academics and research students. Its exploration of the current laws on solidarity regarding asylum and human rights would also benefit advisors in non-governmental organisations, as well as legal advice professionals working with EU citizens.
Critical Acclaim
‘The contributors to the volume advocate specific changes and reforms to the most vital questions on European solidarity today by highlighting the meaning and importance of solidarity in EU law in many fields, such as EU citizenship, health, education, environment, migration, welfare and territorial cohesion. . . The book is [...] highly recommended for academic legal scholars and EU and national policy makers who would like to gain new innovative insights into the concept of solidarity, at EU law and beyond.’
– European Journal of Social Security

‘This book on the central issue of solidarity in the European Union could not be more timely. It makes a crucial and fresh contribution at a moment when the mismatch between strict market rules and the promotion of social values and justice is more salient, and when the need for a serious debate on European solidarity is more prominent. The editors have assembled a superb collection of scholars in what constitutes a key addition to the literature on European law.’
– Diego Acosta, University of Bristol, UK

‘This collection provides a fresh look at solidarity in the EU, critiquing its position as a legal concept and addressing its multiple facets and functions within the legal order. It makes an important and timely contribution to the literature, reflecting on the notion in times of crisis and as an integral part of the EU project, offering new insights to all those interested in the solidarity debate.’
– Violeta Moreno-Lax, Queen Mary Law School, UK
Contributors
Contributors: J. Bast, A. Biondi, E. Dagilytė, D. Gallo, I. Goldner Lang, E. Küçük, G. Lo Schiavo, C.M. Rieder, P. Van Cleynenbreugel

2. Typologies of solidarity in EU law: a non–shifting landscape in the wake of economic crises
Pieter Van Cleynenbreugel

3. Solidarity in EU Law: an elusive political statement or a legal principle with substance?
Esin Küçük

5. Solidarity and patient migration in the context of fundamental rights
Clemens M. Rieder

9. On the content and scope of national and European solidarity under free movement rules: the case of golden shares and sovereign investments
Daniele Gallo