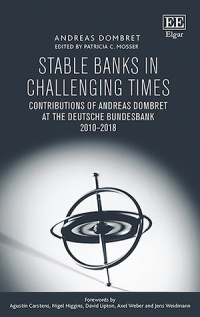 Contributions of Andreas Dombret at the Deutsche Bundesbank 2010–2018

9781839102202 Edward Elgar Publishing
Andreas Dombret, Adjunct Senior Research Scholar, Columbia University, School of International and Public Affairs, New York, US
Publication Date: 2020 ISBN: 978 1 83910 220 2 Extent: 328 pp
Stable Banks in Challenging Times is a collection of speeches delivered by Dr. Andreas Dombret, during his eight-year tenure as a board member of the Deutsche Bundesbank, the German central bank. As witness to the challenges created by the global financial crisis of 2008, Dr. Dombret helped shape large parts of the new regulatory framework. He successfully monitored future developments such digitalization, Brexit and climate change and their effects on the risk situation in the global banking industry and his insights are an invaluable look at the inner workings of global financial regulation and policy.

Stable Banks in Challenging Times is a collection of speeches, including one exclusive interview, delivered by Andreas Dombret during his eight-year tenure as a board member of the Deutsche Bundesbank, the German central bank, and also, from 2014 onwards, his term on the Supervisory Board of the European Central Bank. He also represented Germany at the G7, the G20, the IMF, the FSB, the Basel Committee, the OECD and the BIS.

In these roles Andreas Dombret helped to shape large parts of the new regulatory framework. He successfully monitored future developments such as digitalization, Brexit and climate change, and their effects on the risk situation in the global banking industry. His insights are an invaluable look at the inner workings of global financial regulation and policy.

Financial system academics and researchers as well as professionals in banking, the financial sector, central banking and bank supervision will gain perspective from the author’s observations as they pertain both to the past and our future.

Critical Acclaim
‘The book is an interesting tour d'horizon of the main issues occupying banking supervisors during the post-financial crisis years. Its main focus is on how the lessons from the crisis affected the regulatory and supervisory landscape – especially in Europe – and the lessons the regulators were learning. It also shows the challenges of coming up with a global or European consensus – not only on the causes of the crisis, but rather on the adequate responses. A nice study in financial diplomacy in the early 21st century. It also shows that pre-Covid-19 financial diplomacy was linked to a lot of travel around the globe. In this sense, it is an account of times past when direct personal interaction was desired, not yet feared.’
– Aurel Schubert, Central Banking

‘Banks are central to the operation of our modern economy but also leveraged and fragile, making them a key locus for anyone concerned with public policy. But Andreas Dombret is not just anyone; he has unparalleled experience on the front lines of financial and regulatory policy. There is no better starting point than this volume for anyone seeking to understand the role of banks in the 21st-century world – and what to do about them.’
– Barry Eichengreen, University of California, Berkeley, US

‘Andreas Dombret has a rare perspective on banking and finance, having had successful careers in both the private sector and the regulatory sphere. He illuminates the remaining challenges of the sector, including from environmental risks, with robust clarity and intelligence, and always with the benefit of this dual perspective.’
– Nigel Higgins, Chairman, Barclays Bank, UK

‘Andreas Dombret leverages his experience from a career in banking and central banking to outline what needs to be done to ensure the stability of the banking sector – very timely in a world where banks play an important role in a post-pandemic recovery.’
– Scott McDonald, CEO, Oliver Wyman, US

‘A significant contribution to financial regulatory policy making and bank management benchmarking in uncertain times. Andreas Dombret, intellectual and straightforward, yet realistic and practical. As a member of our global advisory committee and a very good friend of mine, Andreas always offers me a great deal of wisdom and I find every time from him a unique combination of resolute direction as a policy maker and the practical and reasonable sense of a private practitioner. You will certainly find a perfect balance among various interests, both public and private, from these essays. Very timely publication of Andreas’ holistic views and profound insights during his Bundesbank days.’
– Makoto Takashima, President and CEO, Sumitomo Mitsui Banking Corporation, Japan
Contents
Contents: Part l Financial Stability in a Globalised World 1. Securing financial stability: the contribution of economic policy 2. Rules and tools for capturing systemic risk 3. Could less be more? The role of finance for the economy 4. More painkillers, please? Why more finance is the wrong medicine for our growth problem 5. Under Pressure – Is Consolidation the Solution for Europe's Banking Sector? 6. Banking sector in uncertain times – a challenge for whom? 7. Banks navigating uncharted waters 8. How to manage financial crises from a systemic viewpoint 9. Financial systemic risk – The national and international dimension of macroprudential policy 10. Resilient banks – essential building blocks of a stable financial system 11. Shaken but not stirred? The banking system seven years after the crisis Part ll Supervision and Regulation in Europe and beyond 12. Moving together – one year of European banking supervision 13. Failing or likely to fail? Putting the European banking union to the test 14. Banks-allowing them to fail 15. European banking union – a construction site. Common supervision, common resolution, common deposit insurance scheme? 16. Trying to see in the dark – The challenge of financial regulation 17. Big bang banking union – What can we expect? 18. What is “good regulation”? 19. Cutting the Gordian Knot or splitting hairs? 20. The quest for stability – Regulating and supervising banks 21. The euro, the banks and the crisis – Reshaping the world of finance Part lll Basel III – Reflections on a major regulatory project 22. Are we done now? Reflections on the post-crisis supervisory and regulatory regime 23. Too little, too much, or just right? Reforming banking regulation after the financial crisis 24. Basel III – goal within sight 25. Where do we go from here? The future of US-EU financial relations following the finalisation of Basel III 26. Basel III – Are we done now Part lV Behind the curve? The Role of Climate Change in Banking Supervision 27. Behind the curve? The role of climate risks in banks’ risk management 28. Greener finance – better finance? How green should the financial world be? I. Opt in or opt out? The future of the European Union in light of Brexit 29. What does Brexit mean for European banks? 30. The possible impact of Brexit on the financial landscape. Speech delivered at zeb, London, 24 February 2017 31. The future relationship between Germany and the UK in finance after Brexit 32. We can work it out – or can we? Current challenges in Brexit talks 33. Living with fragmentation – Post-Brexit realities in financial services 34. How will Brexit change the map of global finance? II. Digitalisation – the most significant challenge for future banking 35. Digitalisation – repercussions for banks and their supervisors 36. Digital natives? The future of banking in an era of digitalisation 37. Banks spellbound by innovation? Lessons learnt from digitalisation 38. On the prospects of growing electronification in the capital markets 39. Banking on big data – Different policy issues? 40. Totally digital? The future of banking business III. Central Banking and the role of international cooperation 41. The Future of Global Economic Cooperation – Brexit, Basel III and Beyond 42. What’s the future of globalisation? What’s the future of free markets? European optimism in an uncertain world 43. A stairway to heaven? The promises and limits of global integration IV. Conclusion 44. Mediating between worlds – eight years at the Bundesbank