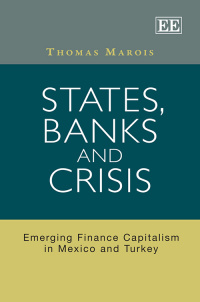 While leading to a timely analysis of the impact of the Great Recession on Mexico and Turkey, the major contribution of States, Banks and Crisis in its account of emerging finance capitalism. This is defined as the current phase of accumulation wherein the interests of financial capital are fused in the state apparatus as the institutionalized priorities and overarching social logic guiding the actions of state managers and government elites, often to the detriment of labor.

This interdisciplinary and accessible study on banking and development will prove to be an important resource for upper-level undergraduates, graduates, and scholars in economics, development studies, political science, political economy, development finance, sociology, international relations and international political economy.
Critical Acclaim
‘There is an urgent need for political economy analysis that theorises the role of finance in emerging capitalist countries. Thomas Marois’s book is therefore an especially valuable – and accessible – contribution to the literature. . . The book marks a vital step in the project to integrate a Marxian theory of state–society relations into our understanding of the role of finance in emerging capitalist countries. For this reason it deserves to be read much more widely than simply by those with an interest in banking in Mexico and Turkey.’
– Jeff Powell, Journal of Latin American Studies

‘Thomas Marois’ book, States, Banks and Crisis, is highly attractive to development scholars because of the combinations of topics it discusses, the countries analyzed, and its characterization of financial capital as dominant. In the last century the states of Mexico and Turkey promoted robust economic growth guided by powerful public banking organizations. The book captures how this came to a halt since the 1980s through the privatizing of economic activity, especially banking activities in ways that induced steep banking crises that halted economic development. Marois discusses the theory and history of Mexico and Turkey in depth offering an excellent analysis of their neoliberal experiences while proposing new alternatives to reshape the linkages between the financial sector and economic growth.’
– Noemí Levy, National Autonomous University of Mexico (UNAM), Mexico City

‘This book attempts to provide a critique of neoclassical and liberal political economists as well as the much-hyped and influential “varieties of capitalism” approach, a variant of institutionalist political economy, by claiming that they are dismissive of “the structural power of financial capital”. In this regard, it makes an important contribution to the critical political economy tradition with its detailed analysis of the relations between the state, finance capital and labour in the context of two “emerging capitalisms”, Mexico and Turkey. Thereby, it enhances our understanding of how the financial crises function as driving forces of neoliberal transformation by initiating new forms of state specific to peripheral capitalism.’
– Galip Yalman, Middle East Technical University, Turkey

‘As analysts fixated on the financial crisis convulsing the core capitalist countries, the so-called “emerging markets” also saw stunning tranformations in the world of finance capitalism. This remarkable study by Tom Marois carefully dissects the evolution of the banking industry in two of the most significant state-led capitalisms, Turkey and Mexico, as they formed finance-led neoliberal economic policies. The consequences for their development strategies makes for sober reading. This is a unique and crucial study for students of the comparative political economy of contemporary capitalism.’
– Greg Albo, York University, Canada

‘Financialization is as financialization does. It is a mix of the universal characteristics of finance within capitalism, its contemporary powerful hold over, even defining feature of, the neoliberal age, and the myriad of specific global markets and countries into which it has penetrated. In a stunning work of comparative political economy, Marois brilliantly weaves together these aspects of finance drawing on both innovative theoretical insights and primary case study evidence from Turkey and Mexico to furnish what will become a classic and original contribution to the understanding of financialization in the developing world, highlighting both the role of the state in the era of putatively free markets and the possibility, indeed, necessity of alternatives.’
– Ben Fine, University of London, UK

‘Marois has provided us with a fascinating, rigorous and important study of the rise and persistence of finance capitalism in Mexico and Turkey. Drawing on an innovative historical materialist lens, Marois’ analysis reveals the struggles, contradictions, and continued significance of the banking sector in defining and redefining neoliberal-led development in these so-called “emerging markets”. This is a very welcome addition to critical understandings of the role of finance and states in the global South.’
– Susanne Soederberg, Queen’s University, Canada
Contents
Contents: 1. Introducing Emerging Finance Capitalism 2. States, Banks, and Crisis in Emerging Finance Capitalism 3. States, Banks, and the History of Postwar Development in Mexico and Turkey 4. Neoliberal Idealism, Crisis, and Banking in Mexico’s State-led Structural Transformation, 1982–94 5. Crisis and the Neoliberal Idealism of State and Bank Restructuring in Turkey, 1980–2000 6. Another Round of Tequila? Interpreting the Costs and Benefits of Emerging Finance Capitalism in Mexico 7. Richer than Croesus? Understanding the Subordination of State and Banks to Emerging Finance Capitalism in Turkey 8. Comparing Alternatives in an Era of Emerging Finance Capitalism Bibliography Index
Add to Wish List
eBook for individuals
978 0 85793 858 9
From £29.56
Click here for options
eBook for library purchase
978 0 85793 858 9
View sample chapter and check access on: