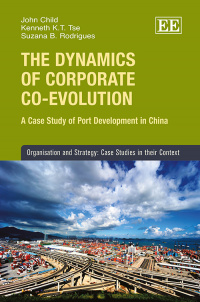 The Dynamics of Corporate Co-evolution

A Case Study of Port Development in China

9781782540229 Edward Elgar Publishing
Organisation and Strategy: Case Studies in their Context
John Child, Emeritus Professor of Commerce, University of Birmingham and Professor of Management, University of Plymouth, UK, Kenneth K.-T. Tse, Professor of Practice in Management, CUHK Business School, The Chinese University of Hong Kong and Suzana B. Rodrigues, Emeritus Professor of International Business and Organization, Rotterdam School of Management, Erasmus University, The Netherlands and Faculty of Business Administration, Universidade FUMEC, Belo Horizonte, Brazil
Publication Date: 2014 ISBN: 978 1 78254 022 9 Extent: 304 pp
Offering insights of unusual richness, this book examines one of the world’s most important business environments to determine the way that organizations can develop through interaction with their environments. It fills a gap in our understanding of the evolution of the Chinese business environment and throws light on the theory of co-evolution in order to inspire management practice.

More Information
Critical Acclaim
Contents
More Information
Offering insights of unusual richness, this book examines one of the world’s most important business environments to determine the way that organizations can develop through interaction with their environments. It fills a gap in our understanding of the evolution of the Chinese business environment and throws light on the theory of co-evolution in order to inspire management practice.

Written on the basis of a collaboration between a leading business manager and renowned university scholars, this groundbreaking book makes a significant contribution both to theory and practice of competitive strategy.
Critical Acclaim
‘This work is an excellent example of a joint business–academic collaboration on telling the story of how a major business evolved successfully with its environment – an environment in which most businesses have found it difficult to operate and most researchers have found it a challenge to explain. Through meticulous research, the research team explains with solid facts and strong theory how a business influenced its highly complex and ambiguous political environment through developing strategic relationships. This project is a model for conducting relevant research that the management field desperately needs. It is exemplary of engaged scholarship that merges the best of scholarship and practice. Both academics and executives will find this book a treasure of ideas.’
– Anne Tsui, Arizona State University, US and President, Academy of Management 2012

‘This book gives full due to two areas which were totally under-researched in earlier work, namely how corporate evolution takes place and how it can proceed within a highly politicized as well as institutionalized environment. The Dynamics of Corporate Co-evolution is a remarkable statement of facts, a solid perspective on co-evolution – the way the relationships between YICT and its environments evolved together. It is an invaluable source of data on how a new container terminal became, after an initially difficult period, one of the world top-class ports largely through the initiatives of its management.’
– Gustaaf De Monie University of Antwerp, Belgium

‘There are two reasons for recommending this highly readable book. It offers a careful explanation of how interaction between investors, operating firms, local politicians and central administrators shapes the corporate governance of new Chinese multinationals and their contracts in a highly regulated infrastructure industry such as ports. Based on the outcome of the empirical study of China’s largest container terminal, the book further convincingly argues how the interaction between firms and local politicians or central administrators specifies the missing link in co-evolution theory, namely the mechanism by which firms can convert their demand for a better fitting business environment into corresponding institutional policies. In short the book offers both additional insights into the new business system in China (and suggestions for foreign firms how to better cope with such a system), and the process by which good theory gets refined.’
– Barbara Krug, Erasmus University, The Netherlands

‘The dramatic progress of many societies in recent decades has rested – often without full acknowledgement – on the hybridizing of different business systems, and secondly on the flowing together of the resulting blended organizations with their political social and cultural surroundings. This is nowhere better illustrated than in China’s Pearl River Delta where the long heritage of Hong Kong as a western trading outpost meets the longer heritage of China as a state-dominated society. In this book the co-evolution of the world's largest matrix of transport hubs is analysed in fine detail by another hybrid: that of world class exponents of both organization theory and the practical managing of complexity.’
– Gordon Redding, INSEAD, France

‘This fascinating, close range look at the co-evolution of a Chinese joint venture port operator and the dynamic political and economic environment in which it is embedded demonstrates yet again that in the right hands, theory and practice can and do inform and infuse each other. In the haystack of contemporary China books, this is a precious needle.’
– Oded Shenkar, Ohio State University, US

‘The Dynamics of Corporate Co-evolution provides an excellent exploration of co-evolution from the perspective of power relations within a hierarchical system. It is relevant not only to firms working within a political environment, but also useful for people working in think tanks and policy analysis. Its treatment of relationship management has universal implications.’
– Huijiong Wang, The State Council, PRC

‘This is a fascinating book on the interdependencies between business and government within the context of Yantian International Container Terminals (YICT). . . The book will delight academics and academic minded practitioners with an interest in how ports evolve together with their political environment. . . the level of detail in theory development is a delight and will inspire repeat reads for those that wish to take the work further.’
– Andrew Grainger, International Journal of Maritime History

Strategies for the Digital Customer Experience

How to Use a Discursive Approach to Study Organizations