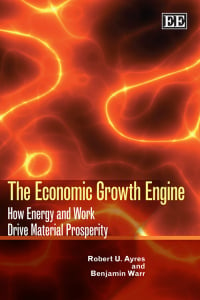 ‘Following the up-and-down energy shock of 2008, Ayres and Warr offer a unique analysis critical to our economic future. They argue that “useful work” produced by energy and energy services is far more important to overall GDP growth than conventional economic theory assumes. Their new theory, based on extensive empirical and theoretical analysis, has important implications for economists, businessmen and policymakers – for anybody concerned with our economic future. Ayres and Warr argue persuasively that economic growth is not only endogenous but has been driven for the past two centuries largely by the declining effective cost of energy. If their new theory is correct, the inevitable future rise of the real cost of energy (beyond the $147 oil price peak in July 2008), could halt economic growth in the US and other advanced countries unless we dramatically improve energy with technology.’
– J. Paul Horne, independent international market economist
Contents
Contents: Preface Introduction 1. Background 2. Technical Progress 3. Industrial Metabolism: Mass/Energy Flows 4. Exergy Conversion to Useful Work 5. Economic Growth Theories 6. The Production Function Approach 7. Numerical Results for the US and Japan 8. Growth Forecasting 9. Economic Growth and Development: Towards a Catch-up Model (Simplified REXSF Model) 10. Conclusions, Implications and Caveats References Index
Add to Wish List
eBook for individuals
978 1 84844 595 6
From £40.76
Click here for options
eBook for library purchase
978 1 84844 595 6
View sample chapter and check access on: