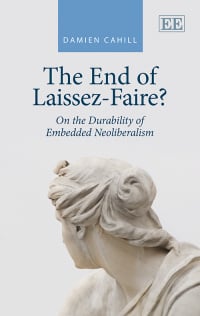 9781781000274 Edward Elgar Publishing
Damien Cahill, Senior Lecturer in Political Economy, University of Sydney, Australia
Publication Date: 2014 ISBN: 978 1 78100 027 4 Extent: 224 pp
When the global financial crisis hit in 2007, many commentators thought it heralded the end of neoliberalism. Several years later, neoliberalism continues to dominate policy making. This book sets out why such commentators got it so wrong, and why neoliberalism remains so durable in the face of crisis.

This book is the first comprehensive critique of the dominant ‘ideas-centred’ approach to understanding neoliberalism. It offers an alternative view of neoliberalism as a policy regime that is embedded in institutions, class relations and ideological norms. Damien Cahill argues that the socially embedded nature of neoliberalism explains why policy makers continue to use neoliberal policies as forms of crisis response, even though the crisis itself resulted from several decades of neoliberal restructuring. It takes aim at dominant interpretations of neoliberalism, arguing that it is wrongly viewed as reflecting neoliberal free market ideals, or as resulting from the influence of fundamentalist neoliberal intellectuals. The book concludes with a prognosis of the future prospects for neoliberalism.

The End of Laissez-Faire? is a compelling and insightful analysis of neoliberalism, which will appeal to scholars and students of public policy, political science, sociology, political economy, anthropology, human geography, industrial relations and economics-related studies.

For a video introducing the book, please visit: https://www.youtube.com/watch?v=s4CcVAGJ1N0

Critical Acclaim
‘A book should be celebrated for its achievement if it advances knowledge, debate, and makes an indelible contribution to its field. Damien Cahill has achieved all of these merits and more in delivering the most compelling analysis of neoliberalism in The End of Laissez-Faire?. Of course, questions can always be raised about this or that aspect of any scholarly accomplishment. But the fact remains that the arguments delivered by Damien Cahill in The End of Laissez-Faire? will shape the terrain of neoliberalism studies for the coming future across the frontiers of political economy, sociology, and international studies.’
– Adam David Morton (2015): The Who of Power?, Globalizations