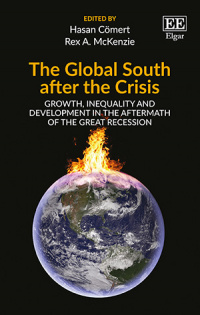 The Global South after the Crisis

Growth, Inequality and Development in the Aftermath of the Great Recession

9781783474301 Edward Elgar Publishing
Edited by Hasan Cömert, Assistant Professor, Middle East Technical University, Turkey and Rex A. McKenzie, Lecturer, Kingston University, UK
Publication Date: 2016 ISBN: 978 1 78347 430 1 Extent: 288 pp
This volume is split into two accessible sections. The first part concentrates on the impact of the crisis on growth, inequality, policy responses and policy shifts in key areas such as central banking. The second part comprises individual country case studies and includes an exploration of the vulnerabilities related to the integration of developing economies into the world economy. The effect of the crisis on trade, and the ways in which some developing countries have entered into a prolonged period of stagnant growth following the global crisis are all considered.

More Information
Critical Acclaim
Contributors
Contents
More Information
The Global South after the Crisis is an appraisal and analysis of how the Great Recession of 2008 to 2009 unfolded in the developing world and an exploration of its effects on those countries, particularly on each one’s economic management. Essays identify the ways in which the crisis was transmitted to these countries and the associated policy responses of the governments concerned.

This volume is split into two accessible sections. The first part concentrates on the impact of the crisis on growth, inequality, policy responses and policy shifts in key areas such as central banking. The second part comprises individual country case studies and includes an exploration of the vulnerabilities related to the integration of developing economies into the world economy.

This well-integrated compilation of both original case studies and thematic essays will be of interest to scholars and professionals working in the development field and other readers wishing to obtain an understanding of socio-economic developments in the wider world. Aid workers, policy makers, and social science researchers will also find value in this book.
Critical Acclaim
‘This book highlights the complexities of how developing countries have responded to the global crisis and points to the strongly adverse effects of trade shocks for some. Fiscal and monetary policies were important in mitigating adverse negative effects, but these are being undermined by reliance on cross-border financial flows. These are important results for policy makers and citizens to understand.’
– Jayati Ghosh, Jawaharlal Nehru University, India

‘While nearly a decade has passed since the financial crisis rocked the global economy, the profound implications of this crisis for macroeconomic outcomes, monetary policy and financial governance in the global south have received little systematic attention. Cömert and McKenzie’s The Global South after the Crisis fills in this gap; their country-by-country overviews and detailed case studies show how the 2007–08 crisis shook the foundations of developing economies’ growth and management, leading to the profound systemic downturns afflicting the global south today.’
– Gary Dymski, University of Leeds, UK

‘The Global South after the Crisis is a timely and important volume. In a series of information-filled chapters on the impact of the Great Financial Crisis on developing countries, this excellent team of economists offers insightful analyses of the ways in which the crisis affected many developing countries differently from the rich countries of the north. The co-editors Hasan Cömert and Rex A. McKenzie highlight in their well-written Introduction the interesting and provocative main findings of their team: In general, southern countries were not as badly affected by the crisis as were those in the north; among the southern countries, those that did the best were the countries that had been less integrated in finance and in trade with the global economy and those who had created the policy space to engage in effective counter-cyclical monetary and fiscal policy. The editors caution, however, that most developing countries have not made the broad institutional changes in trade, financial and central bank policies that will ensure a strong performance the next time a global crisis hits. All in all, by reading this important book, students and policy makers will learn important lessons to take from the last crisis that may help them avoid the worst effects of the next one.’
– Gerald Epstein, University of Massachusetts Amherst, US

‘The financial crises of 2007-09 clearly originated in the global north, and their causes and effects have been much analysed. This book is a very welcome work to examine the effects on the global south. It sets out how the global south suffered from the contagion effects of the crises through a study of the 15 countries most affected and studies of a number of individual countries. The heterogeneity of experiences and of abilities to respond to the financial crises amongst countries of the global south stands out, and the trade channels as the most important transmission mechanisms of the recession.’
– Malcolm Sawyer, University of Leeds, UK
Contributors
Contributors: S. Bahçe, A. Benlialper, M.S. Çolak, H. Cömert, M.S. Çolak, A. de Melo Modenesi, O. Justo, A.H. Kös, R.A. McKenzie, R.L. Modenesi, S. Nambiar, M. Reis, J.E. Santarcángelo, E.N. Uğurlu

PART I: Growth, Inequality and Policy Responses
1. The Impacts of the 2008 Global Financial Crisis on Developing Countries: The Case of the 15 Most Affected Countries
Hasan Cömert and Esra Nur Uğurlu

2. A Tale of Two Worlds? Income Distribution and the Global Crisis: Observations From the North/South Nexus
Serdal Bahçe and Ahmet Haşim Köse

3. Central Banking in Developing Countries After the Crisis: What Has Changed?
Ahmet Benlialper and Hasan Cömert

4. Monetary Transmission in Africa: A Review of Official Sources
Rex A. McKenzie

8. The Impacts of the Global Crisis on the Turkish Economy, and Policy Responses
Hasan Cömert and Mehmet Selman Çolak

Handbook on the Economics of Disasters

Handbook of Banking and Finance in Emerging Markets