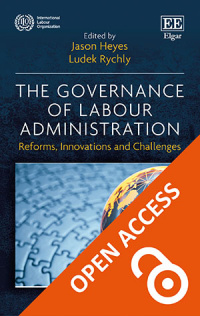 Combining rigorous research and practical policy recommendations, the book contains contributions from top scholars in the fields of economics, employment relations, labour law and public administration, as well as officials from the International Labour Organization (ILO). Chapters offer wide-ranging investigations of topics such as labour inspection, social dialogue involving employer organizations and trade unions, and the role of performance management and new technologies in labour administration. The book further demonstrates the vital role of labour administration in upholding employment rights and promoting employment, emphasizing the ways in which it can contribute to good governance, sustainable development and decent work.

This will be a critical read for employment relations, global labour studies and public administration scholars. Policy makers and practitioners working in and around employment policy and labour law will also find this book beneficial, particularly with its in-depth case studies.

Critical Acclaim
‘This highly instructive book on how labour administration is struggling with challenges in the contemporary world of labour gives a compact analysis of the evolution of national systems in the context of the ILO’s 1978 Labour Administration Convention. The case studies of the reforms and innovations in labour administration presented here, for eight countries on different continents with differing economies, make it essential reading for scholars and practitioners alike.’
– Kazuo Sugeno, University of Tokyo and Member of the Japan Academy, Japan

‘This collection shines an informed light on an area vital to policy delivery – effective labour administration, and its contribution to good public governance. I found the wide-ranging contributions from different regions and perspectives interesting in themselves while together they help identify important preconditions and enablers. The book should be of value to academics across a number of areas including employment relations, as well as key reading for policy makers, social partners and those involved in the staffing and oversight of labour administration bodies.’
– Linda Dickens, University of Warwick, UK

‘Recent years have witnessed an explosion of new forms of work organization such as gig work, temporary work, and freelancing. These developments have brought regulatory questions to the fore. Much attention has been directed at the content of those regulations, yet without effective administration the rules have no teeth. This is a topic that is too often overlooked. The Governance of Labour Administration performs a welcome service by filling this gap via an impressive international comparative study. This volume is an important and useful contribution to the ongoing debate about how best to manage a rapidly changing job market.’
– Paul Osterman, Massachusetts Institute of Technology, US
Contributors
Contributors: Burt S. Barnow, Robert Cameron, Sunil Chandrasiri, Judith Anna Czepek, José Luis Daza, Virginie Forest, Anna Milena Galazka, Maria Gavris, Ramani Gunatilaka, Jason Heyes, Christopher T. King, Konstantinos (Kostas) Papadakis, Roberto Pires, Ludek Rychly, Maria Luz Vega Ruiz, Kingshuk Sarkar, J. Timo Weishaupt, Ryuichi Yamakawa

PART I KEY ISSUES IN LABOUR ADMINISTRATION
2 Evolution of national systems of labour administration
since the adoption of the ILO Labour Administration
Convention, 1978 (No. 150) 23
José Luis Daza
3 Social dialogue at the dawn of the ILO’s centenary: sorting
out challenges, setting priorities for the future 43
Konstantinos Papadakis
4 Understanding ICT use in labour administration: taking stock 68
Anna Milena Galazka