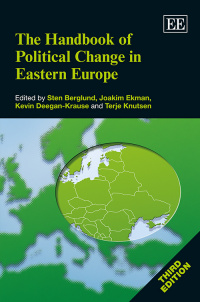 The Handbook of Political Change in Eastern Europe, Third Edition

More Information
Critical Acclaim
Contributors
Contents
More Information
This third edition of The Handbook of Political Change in Eastern Europe provides an authoritative and thorough analysis of the political changes, which have occurred in Central and Eastern Europe since the demise of communism. It offers an historical, comparative perspective of the region and focuses on the social consequences of the democratisation process.

The country-specific chapters are written by scholars with well-documented area expertise on their respective cases: Estonia, Latvia, Lithuania, Poland, The Czech Republic, Slovakia, Hungary, Slovenia, Romania, Bulgaria, Croatia, Bosnia, Serbia, Montenegro, Macedonia, Albania, Ukraine, Moldova, and Georgia. Each chapter includes detailed examinations of elections, the formation of governments, electoral systems and constitutional arrangements. These in-depth and up-to-date analyses are supplemented by conclusions on the party systems and emerging political structures in the region as a whole, as well as the consolidation of democracy in a post-communist setting.

The revised and expanded version of The Handbook of Political Change in Eastern Europe provides a state-of-the art companion, which will be indispensable for students and scholars in the social sciences including political science, comparative politics, European studies and political history, as well as for policy makers and practitioners.
Critical Acclaim
‘Lots has changed in Eastern Europe in the past quarter-century and the new edition of this major study of the region sets out these changes in directions for the better and for the worse.’
– Richard Rose, University of Strathclyde, UK

‘This Handbook offers a historically informed, systematic account of the political development in Central and Eastern Europe. Two chapters lay out a framework for comparison. 26 specialists provide analyses for 19 countries. In an appendix, each of these country chapters documents election results, government composition, the electoral system, and the constitutional framework. The concluding chapter synthesizes the major results. The Handbook is the most comprehensive source for an up-to-date analysis of all Central and Eastern European countries within the sphere of influence of the European Union. It is a “must have” for students and scholars interested in how to evaluate the state of democracy in this region of the globe.’
– Hans-Dieter Klingemann, New York University Abu Dhabi, UAE and Social Science Research Center Berlin, Germany

1. The Diversity of Political Regimes
Sten Berglund and Joakim Ekman