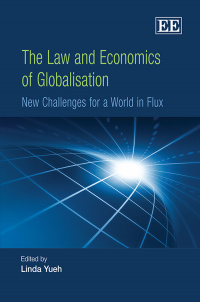 The Law and Economics of Globalisation

New Challenges for a World in Flux

9781845421953 Edward Elgar Publishing
Edited by Linda Yueh, Fellow in Economics, St Edmund Hall, University of Oxford and Adjunct Professor of Economics, London Business School, UK
Publication Date: 2009 ISBN: 978 1 84542 195 3 Extent: 352 pp
This inter-disciplinary volume focuses on the economic and legal challenges confronting globalisation and the evolution of the global system. The Law and Economics of Globalisation discusses the hotly debated topic of globalisation from a wide set of perspectives of law, economics and international political economy.

More Information
Critical Acclaim
Contributors
Contents
More Information
This inter-disciplinary volume focuses on the economic and legal challenges confronting globalisation and the evolution of the global system. The Law and Economics of Globalisation discusses the hotly debated topic of globalisation from a wide set of perspectives of law, economics and international political economy.

The authors shed new light on the legal, economic and institutional issues raised by globalisation, extending into areas previously considered as national issues. They discuss how the development of the norms, institutions and reach of the global system will be influenced by the domestic and international concerns arising from the increasing integration of countries in the new century.

With contributions from lawyers, economists and other experts in the field, this book will be welcomed by academics, students, researchers, and policymakers who are interested in a comprehensive volume on economic globalisation. It will also appeal to a wider audience, such as executive education courses, as well as business and law schools.
Critical Acclaim
‘The diversity of author backgrounds, coupled an assortment of provocative insights, makes this book a useful tool for delving into the meat of globalization, providing a succinct but authoritative overview of the underpinnings necessary to appreciate the who, what, where, and when of globalization.’
– American Society of International Law

‘This is a fascinating and insightful set of essays, the relevance of which has only increased with the financial and economic crisis. The ideas and basic positions of the authors range wide, but that is exactly what we require as we struggle to understand twenty-first century globalisation and what to do about it. I should like to see it in the hands of all academics and policy-makers working on global affairs.’
– Alan Winters, University of Sussex, Chief Economist, UK Department for International Development and Former Head of Research, the World Bank

3. Constitutionalism and the Regulation of International Markets: How to Define the ‘Development Objectives’ of the World Trading System?
Ernst-Ulrich Petersmann

4. Negotiation or Litigation? The Curiously Evolving Governance of the WTO
Kamala Dawar and Peter Holmes

10. Two Scientists for Every Man, Woman and Dog in America? How Sustainable is Globalisation?
Raphael Kaplinsky

11. Globalisation of the World Economy: Potential Benefits and Costs and a Net Assessment
Michael D. Intriligator