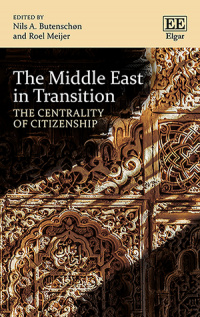 9781788111126 Edward Elgar Publishing
Edited by Nils A. Butenschøn, Professor, Norwegian Centre for Human Rights, Faculty of Law, University of Oslo, Norway and Roel Meijer, Associate Professor, Radboud University, Faculty of Religion, Theology and Religious Studies, Nijmegen, the Netherlands
Publication Date: 2018 ISBN: 978 1 78811 112 6 Extent: 368 pp
The violent transitions that have dominated developments since the Arab Uprisings demonstrate deep-seated divisions in the conceptions of state authority and citizen rights and responsibilities. Analysing the Middle East through the lens of the ‘citizenship approach’, this book argues that the current diversity of crisis in the region can be ascribed primarily to the crisis in the relations between state and citizen. The volume includes theoretical discussions and case studies, and covers both Arab and non-Arab countries.

More Information
Critical Acclaim
Contributors
Contents
More Information
The Middle East is currently undergoing its most dramatic transition since World War I. The political order, both within individual countries and on the regional level, has been in turmoil ever since the Arab Uprisings in 2011. Analysts are struggling to identify conceptual frameworks that capture the complex nature of the developments that we observe.

The Middle East in Transition demonstrates how citizenship understood as a social contract between citizens and the state is a key factor in current political crises in the region. The book analyses three distinct dimensions of citizenship in the Middle East: the development of citizenship in specific countries, including Morocco, Israel Turkey and Iraq; Islam and the writings of twentieth-century Islamic thinkers; and the international dimension of citizenship, particularly regarding EU policies towards the region and the rights of Syrian refugees.

This timely book provides a comprehensive insight into the current implications of the changing relationships between the citizen and the state in the Middle East. Discussing the topic with clarity and detail, it will be essential reading not only for researchers but also for policy makers and government officials.
Critical Acclaim
‘This work has come at an important time in the wake of the so-called Arab spring when the fluctuating patterns of state-citizen relations were rethought with varying success. Looking at citizenship in the region from multi-disciplinary and content related perspectives, this collection of essays discusses the variety of ways in which citizenship operates – and is thought about – in the contemporary Middle East and beyond. In looking at the contested dimensions of citizenship, this book is an important and timely work for anyone interested in the processes by which what it means to be a citizen is made and remade.’
– Rachel M. Scott, Virginia Tech, US

3. Bringing about the Non-Citizen in Iraq: A Genealogical Approach
Mariwan Kanie

4. Claiming Spaces for Acts of Citizenship: Recent Experiences of Activists in Morocco
Sylvia I. Bergh and Salima Ahmadou

Part II Islam and the issue of citizenship
8. The Political, Politics, and Political Citizenship in Modern Islam
Roel Meijer

9. Can the Umma Replace the Nation? Salafism and Deterritorialized Citizenship in Lebanon and Kuwait
Zoltan Pall

10. Iran’s Hizbollah and Citizenship Politics: The Surprises of Religious Legislation in a Hybrid Regime
Shirin Saeidi

12. Citizenship and Migration Diplomacy: Turkey and the EU
Peter Seeberg