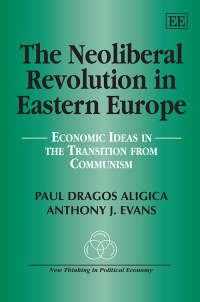 The Neoliberal Revolution in Eastern Europe

Economic Ideas in the Transition from Communism

9781847206374 Edward Elgar Publishing
New Thinking in Political Economy series
Paul Dragos Aligica, Senior Research Fellow, F. A. Hayek Program for Advanced Study in Philosophy, Politics, and Economics, George Mason University, US and Anthony J. Evans, Assistant Professor of Economics, ESCP-EAP European School of Management, UK
Publication Date: 2009 ISBN: 978 1 84720 637 4 Extent: 272 pp
This unique book develops two different but related research agendas: the study of the spread of ‘neoliberalism’ – as seen from the perspective of Eastern European post-communist evolutions; and the study of Eastern European transition – as seen from an ideas-centred perspective. It challenges a series of misunderstandings and myths about the spread of neoliberal economic ideas in Eastern Europe and offers a clearer understanding of progress since market reform began.

More Information
Contents
More Information
Very few studies have ventured to explore the shift in economic ideas that were such a critical factor in shaping and understanding the East European transition process. Paul Dragos Aligica and Anthony J. Evans have seized upon the potential that this crucial case has to illuminate the larger phenomenon of diffusion and adoption of economic ideas. Two different but related research agendas are developed: the study of the spread of ‘neoliberalism’ as seen from the perspective of Eastern European post-communist evolutions and the study of Eastern European transition as seen from an ideas-centered perspective.

Combining a distinctive synthesis of the existing data about the spread of neoliberal economic ideas in Central and Eastern Europe with an analysis of the processes at work, the authors challenge a series of misunderstandings and myths about the spread of neoliberal economic ideas. The disputed topics include: the myth of an Eastern European rush to embrace the theories and ideas that may be considered the mark of ‘market fundamentalism’; the notion that a harsh ‘neoliberal dogmatism’ was somehow imposed on the region from outside; the idea that the standardization and regimentation of economic thinking was a result of the spread of the Western way of doing economics; and the belief that the Eastern Europeans passively embraced this uniformity and standardization due to pressure from the Westerners.

This unusual synthesis will appeal to scholars in economics, political science, communist/post-communist studies and new institutionalism, as well as policymakers.
Contents
Contents: Introduction Part I: The Spread of Western Economic Ideas in Eastern Europe: An Overview 1. Economic Ideas: Demarcations and Schools of Thought 2. Western Economic Ideas and the Fragile Hegemony of Marxism: The Pre-1989 Setting 3. The Remarkable Path to Primacy of Western Economic Ideas: Change and Institutionalization after 1989 Part II: Frameworks for Analyzing and Understanding the Spread of Economic Ideas 4. Frameworks for Analysis and Interpretation: Diffusion, Marketplace of Ideas and Growth of Knowledge 5. Frameworks for Analysis and Interpretation: From Personal Commitment to Functional Rationality Part III: Facets, Themes and Cases: Diversity and Change in the Neoliberal Revolution of Ideas 6. A Test of Market Fundamentalism: Austrian Economics 7. Western Economics and Local Responses: A Closer Look 8. The Flat Tax in Eastern Europe: A Comparative Perspective 9. Neoclassical Economics, New Institutionalism and the Eastern European Economic Reform Experience Conclusions Bibliography Index
Add to Wish List
eBook for individuals
978 1 84844 594 9
From £25.00
Click here for options
eBook for library purchase
978 1 84844 594 9
View sample chapter and check access on: