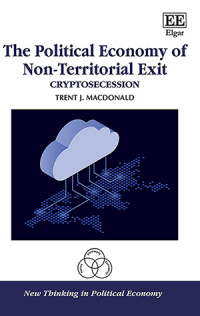 The Political Economy of Non-Territorial Exit

Employing a variety of theoretical approaches, including new institutional economics, comparative analysis, public choice and Hayekian political economy, Trent J. MacDonald investigates the prospects of a government that separates its traditional functions and decentralises control to non-territorial jurisdictions. Following the history of political-economic thought, the author uncovers an extensive history of non-territorial governance, and provides insight into present-day examples. He emphasises the political mechanism of ‘non-territorial secession’ and the emerging phenomenon of ‘cryptosecession’ as the theoretical future of governance. Through an extension of the Coase theorem, this intricate book examines how political systems and jurisdictions change, developing a new theory of spontaneous order.

Critical Acclaim
‘This book is a beautiful example of how Austrian economics, Public Choice theory, and New Institutional economics can help us better understand the world around us. MacDonald offers us a radical way to restructure governance and move away from an approach that centers territorial nation states. Moreover, he provides analytical frameworks for understanding the world we live in today.’
– Nathan Goodman, The Review of Austrian Economics

'”Creative” does not begin to describe MacDonald’s contribution. He ably combines political economy with an impressive knowledge of political theory, history, and technology, developing both novel theoretical insights and some inventive—and radical!—institutional designs. Political economy scholars of all stripes will find ideas worth engaging in this book.'
– Adam Martin, Texas Tech University, US

‘MacDonald masterfully unbundles the state with theoretical rigor. He gives voice to the economic efficiency of lowering the costs of political exit by de-territorializing the state. This is the most detailed and thorough contemporary argument for Panarchy, non-territorial states founded on contractual agreements. This book is fascinating for readers interested in the political possibilities opened by globalization, the internet, and cryptocurrencies. Economists, political and social theorists and philosophers, historians of ideas, and legal scholars interested in sovereignty and secession would benefit greatly from this interdisciplinary study.’
– Aviezer Tucker, Harvard University, US and co-editor, Panarchy: Political Theories of Non-Territorial States

‘There is no reason to expect the awkward bundles of obligations called "states" to be economically efficient or politically stable. Trent MacDonald presents an ambitious unpacking of “sovereignty,” based on "non-territorial unbundling." This seems impossibly radical, but modern "states" have only existed for 400 years. Anyone who wants to understand the next 400 years should read this book, right away.’
– Michael C. Munger, Duke University, US

‘Non-territorial exit (by cryptosecession) may well be the predominant means of political reorganisation in the world of tomorrow. Trent MacDonald has written a highly original, engaging and deeply profound book analysing how this might work and what it implies for economics, society and politics. A hugely important new idea.’
– Jason Potts, RMIT University, Australia
Contents
Contents: Introduction Preface 1. Economic theory of non-territorial unbundling 2. History of an idea 3. The political-jurisdictional Coase theorem 4. Political-jurisdictional possibilities and transitions 5. Theory of non-territorial internal exit 6. Spontaneous order in the formation of non-territorial political jurisdictions Summary and conclusion References Index

Handbook on Politics and Public Opinion