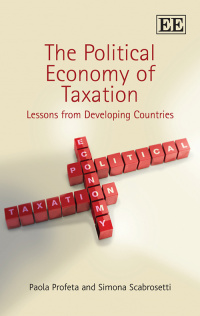 The Political Economy of Taxation

More Information
Critical Acclaim
Contents
More Information
Taxation is a major issue in the economic and political spheres. This book focuses on a sample of developing countries from Asia and Latin America that experienced an economic and democratic transition during the period 1990–2004.

Using a unique dataset the authors show that tax revenue is higher in more democratic regimes, consistent with the standard view that democracies have to satisfy the redistributive needs of the electorate. They also find that a second relationship between the level of democracy and the composition of taxes (mainly direct versus indirect) is much harder to predict. However, a comparison with new EU member states suggests that more mature democracies are associated with higher levels of direct tax.

This unique book in a relatively under-researched subject area will prove essential reading for academics, researchers and practitioners focusing on political economy, public finance and the economics of taxation.
Critical Acclaim
‘Providing light to a subject that is not often enough discussed, The Political Economy of Taxation is packed cover to cover with thoughtful information, and a core addition to any international economic studies collection.’
– The Midwest Book Review

‘Paola Profeta and Simona Scabrosetti have provided us with a novel comparative analysis of the tax systems in Asia, Latin America and the new EU countries. Anyone who wants to know how contemporary empirical models can be used to study the political economy of the tax mix in developing and transition economies will want to read this book.’
– Stanley Winer, Carleton University, Canada

‘In this original book, Paola Profeta and Simona Scabrosetti use data and information on political institutions from developing and new EU member countries to investigate the political economy of taxation. How do political institutions influence tax burdens and tax structures? They generate highly interesting results. . . I am sure that this innovative book will attract the attention of many experts interested in taxation, regardless of the professional field to which they are anchored. I expect this book will be cited often.’
– Vito Tanzi, International Institute of Public Finance, US
Contents
Contents: Preface 1. Introduction 2. The Political Economy of Democracies: A Review of the Literature 3. Data, Approach and Overview 4. Asia 5. Latin America 6. Asia, Latin America and New EU Members Countries 7. Data Appendix: List of all Variables and their Sources Bibliography Index
Add to Wish List
eBook for individuals
978 1 84980 549 0
From £25.00
Click here for options
eBook for library purchase
978 1 84980 549 0
View sample chapter and check access on: