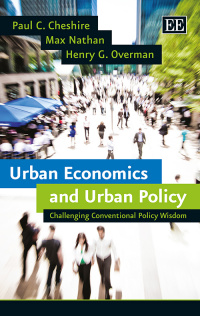 9781781952511 Edward Elgar Publishing
Paul C. Cheshire, Professor of Economic Geography, London School of Economics and Political Science, Max Nathan, Birmingham Business School, University of Birmingham and Henry G. Overman, London School of Economics and Political Science, UK
Publication Date: 2014 ISBN: 978 1 78195 251 1 Extent: 256 pp
In this bold, exciting and readable volume, Paul Cheshire, Max Nathan and Henry Overman illustrate the insights that recent economic research brings to our understanding of cities, and the lessons for urban policy-making. The authors present new evidence on the fundamental importance of cities to economic wellbeing and to the enrichment of our lives. They also argue that many policies have been trying to push water uphill and have done little to achieve their stated aims; or, worse, have had unintended and counterproductive consequences.

More Information
Critical Acclaim
Contents
More Information
In this bold, exciting and readable volume, Paul Cheshire, Max Nathan and Henry Overman illustrate the insights that recent economic research brings to our understanding of cities, and the lessons for urban policy-making. The authors present new evidence on the fundamental importance of cities to economic wellbeing and to the enrichment of our lives. They also argue that many policies have been trying to push water uphill and have done little to achieve their stated aims; or, worse, have had unintended and counterproductive consequences.

It is remarkable that our cities have been so successful despite the many shortcomings of urban policies and governance. These shortcomings appear in both rich and poor countries. Many powerful policies intended to influence urban development and spatial differences have been developed since the late 1940s, but they have been subject to little rigorous economic evaluation. The authors help us to understand why economic growth has emerged so unevenly across space and why this pattern persists. The failure to understand the forces leading to uneven development underlies the ineffectiveness of many current urban policies. The authors conclude that future urban policies need to take better account of the forces that drive unevenness and that their success should be judged by their impact on people, not on places – or buildings.

This groundbreaking book will prove to be an invaluable resource and a rewarding read for academics, practitioners and policymakers interested in the economics of urban policy, urban planning and development, as well as international studies and innovation.

Critical Acclaim
‘Paul Cheshire, Max Nathan, and Henry Overman recognize the large disconnect between urban economics and urban policy, and their book is intended to help bridge that gap. It is the authors’ general contention that “urban economists have to date contributed very little to the development and evaluation of real-world urban policy” (p. 1). While I think there are some notable counterexamples to which I return below, I largely agree with this claim. In addition, the authors believe that urban economics, particularly modern urban economics, has much value to add to policy making. Here, I think the case is less clear-cut, but the authors present it well. Given the authors’ purpose, readers of this book can expect a nontechnical summary of recent research in urban economics, with a clear and complete explanation of what it implies for urban policymaking. This is precisely what the authors deliver, so readers should not expect new findings from this extremely accomplished research team; instead they get careful synthesis, interpretation,and policy recommendations. As such the book will be of most value to students and practitioners in fields that do have a lot of influence in urban policy, especially planning and government.'
– Andrew Haughwout, Journal of Regional Science

‘The book is among the most effective critiques of contemporary urban planning thought,​ ​characterized by such approaches as urban containment, compact city, and densification.’
– Wendell Cox, New Geography

‘Urban Economics and Urban Policy pulls together cutting-edge developments in urban and regional economics and draws out their implications for urban policy. This new urban economics goes beyond simple comparative advantage and cost competitiveness of cities, and beyond simple views of capital and labor. It develops a much more complex and realistic view of what constitutes local advantage, due to the spatial sorting of different types of people and different types of firms, giving rise to a lumpy landscape of people, activities, and incomes. By taking seriously the new ways we understand the forces shaping the geography of economic development, the authors suggest fresh new ways to work with the grain of markets, but without letting them rip. It is a tour de force.’
– Michael Storper, London School of Economics and Political Science, UK

This is a terrific book that summarises the state of economic knowledge about urban economies but – as it also acknowledges – there is much we don’t understand. . . Urban Economics and Urban Policy provides an invaluable foundation for the debate ahead.
– Diane Coyle, The Enlightened Economist
Contents
Contents: Foreword by Ed Glaeser 1. Introduction 2. Urban Economic Performance 3. Residential Segregation and People Sorting Within Cities 4. Planning for a Housing Crisis: Or the Alchemy by Which We Turn Houses into Gold 5. Planning and Economic Performance 6. Planning: Reforms that Might Work and Ones that Won’t 7. Devolution, City Governance and Economic Performance 8. Urban Policies 9. Conclusions Index
Add to Wish List
eBook for individuals
978 1 78195 252 8
From £22.36
Click here for options
eBook for library purchase
978 1 78195 252 8
View sample chapter and check access on: