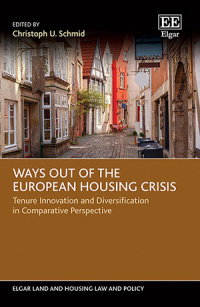 Starting with an introduction to national housing systems and their development, contributions from experienced legal academics explain the potential of alternative and intermediate tenures used in individual countries. Divided into groups reflecting not only geographical vicinity, but also roughly similar types of welfare states, the book examines 14 jurisdictions all over Europe. Taken together, the national models constitute what can be labelled a European acquis of housing options. The final comparative evaluation focuses on selecting best practice models, potentially capable of being transferred to, and used beneficially in, other countries.

Ways out of the European Housing Crisis will be of great interest for academics in European law, property law and public administration and management. It will also be a key resource for policy makers and experts associated with political institutions, civil society and housing associations, both at European and national levels.
Critical Acclaim
‘This very valuable text develops an informative taxonomy within which it compares the growing range of innovations in intermediate tenures that have been developed in the face of the worsening housing crisis across Europe. It is an invaluable reference text not just for lawyers but for those working across the fields of housing economics and finance.’
– Christine Whitehead, London School of Economics, UK

‘This far reaching book really widens the scope of current comparative housing research by offering – within a common analytical frame – a detailed discussion on the whole repertoire of regulations for various housing settings, beyond homeownership and rentals, in 14 European countries. It is a must-read for comparative researchers.’
– Teresio Poggio, University of Trento, Italy